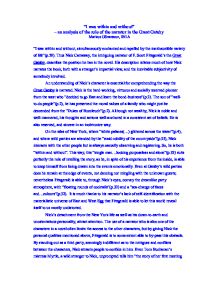 "I was within and without" - an analysis of the role of the narrator in the Great Gatsby Markus G�ransson, IB1A "I was within and without, simultaneously enchanted and repelled by the inexhaustible variety of life"(p.28). Thus Nick Carraway, the intriguing narrator of F. Scott Fitzgerald's the Great Gatsby, describes the position he has in the novel. His description relates much of how Nick narrates the book, both with a stranger's impartial view, and the inevitable subjectivity of somebody involved. An understanding of Nick's character is essential for comprehending the way the Great Gatsby is narrated. Nick is the hard-working, virtuous and socially reserved pioneer from the west who "decided to go East and learn the bond-business"(p.2). The son of "well-to-do people"(p.2), he has preserved the moral values of a family who might just be descended from the "Dukes of Buccleuch"(p.2). Although not wealthy, Nick is noble and well-mannered, his thoughts and actions well-anchored in a consistent set of beliefs. He is also reserved, and sincere in an inobtrusive way. On the isles of New York, where "white palaces(...) glittered across the water"(p.4), and where wild parties are attended by the "staid nobility of the countryside"(p.35), Nick interacts with the other people but is always casually observing and registering. So, he is both "within and without". This way, this "single man...looking purposeless and alone"(p.33) ...read more.

On some occasions, the author enters directly into the minds and emotions of the other characters. The most obvious example is when Jordan relates to Nick Daisy's and Gatsby's shared past. Here, the story shifts to be told from Jordan's perspective. To indicate that this passage is more than a simple part of a dialogue between her and Nick, Fitzgerald omits the inverted commas. Although Nick remains the narrator, he is in a way forgotten and expelled to the background by this small detail, which makes focus be put on Jordan. In some other parts of the novel third-person narration is used. Several of these passages take place under the "giant eyes of Doctor T.J. Eckleburg"(p.99). The chief role of T.J. Eckleburg - a pair of spectacle-decorated eyes on a crumbling advertisement board - is however not simply to compensate for Nick's absence or insufficiency in certain scenes, but rather to symbolize God's diminishing importance in our world. Impudent acts of adultery, greed and jealousy, as well as a hit-and-run accident, take place right under the brooding eyes of the advertisement board. At one point, Wilson says "God sees everything", but the complete disregard by the novel's characters for the tattered advertisement lets us understand that God is dead. There is hence more to Fitzgerald's changing of narrator than simply an occasional technical need to replace Nick. ...read more.

What can be said, on the other hand, is that Nick disapproves generally of the life-style of Tom, Daisy and Gatsby. These characters incarnate to some extent the desire for materialistic wealth "for which [Nick has] an unaffected scorn"(p.2). Nick's early statements of, and hints at, distaste for this life-style, lets us suspect that the story in this sense is told from an angle of subjectivity. This additional aspect gives further strength to the idea that Fitzgerald uses the mid-westerner Carraway as a narrator with several different purposes. Besides having a personality and education that allow Fitzgerald to use elaborate language, being objective, and appreciating Gatsby's dream, Nick is also the communicator of the author's critique of post-war "flapper" America. In conclusion, Nick is an unallied, yet not altogether impartial, third party who is devoted to "reserve all judgement"(p.1) of other people. Moreover, his middle-western background and dispassion for materialistic wealth make him a suitable recounter of the prodigial life he encounters in New York, and to which he is naturally foreign. When Fitzgerald relieves Nick of his role as narrator and recounts the story from different points of view, he does it with a purpose, or to some extent simply because Nick becomes insufficient. The main qualities of Nick, which in every other part make him essential for bringing forth certain of the author's messages, are his bourgeois background, his appreciation for Gatsby's profound and pure dedication to a dream and his critique of the lack of spirituality in the American twenties. Word count: 1427 ...read more.