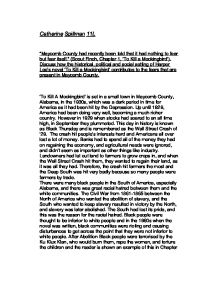 Catherine Spillman 11L "Maycomb County had recently been told that it had nothing to fear but fear itself." (Scout Finch, Chapter 1, 'To Kill a Mockingbird'). Discuss how the historical, political and social setting of Harper Lee's novel 'To Kill a Mockingbird' contributes to the fears that are present in Maycomb County. 'To Kill A Mockingbird' is set in a small town in Maycomb County, Alabama, in the 1930s, which was a dark period in time for America as it had been hit by the Depression. Up until 1929, America had been doing very well, becoming a much richer country. However in 1929 when stocks had soared to an all time high, in September they plummeted. This day in history is known as Black Thursday and is remembered as the Wall Street Crash of '29. The crash hit people's interests hard and Americans all over lost a lot of money. Banks had to spend all of the money they had on regaining the economy, and agricultural needs were ignored, and didn't seem as important as other things like industry. Landowners had let out land to farmers to grow crops in, and when the Wall Street Crash hit them, they wanted to regain their land, as it was all they had. Therefore, the crash hit farmers the most and the Deep South was hit very badly because so many people were farmers by trade. ...read more.

By the end of the novel the reader sees that Boo is not actually the "monster" he was thought to be. He is actually a kind, but shy man whose greatest act of kindness was saving Scout and Jem from being killed by Bob Ewell. This was the first time Scout had actually seen Boo and because she has finally come to know the truth about him Scout is not scared. In Chapter 28 on the way home from the Halloween Pageant Boo Radley was actually sitting on their porch, however Scout didn't seem to be very bothered. This is ironic even though she doesn't yet know it is Boo Radley, because for the past 2 years she has been waiting to see him. We do get a description of Boo Radley in Chapter 29, and although he is as pale as a ghost, he doesn't possess any of the ghostly characteristics the children thought he had. Just like society today, people jump to conclusions when they hear rumours, and most times the rumours are wrong. Boo Radley left gifts for the children in a tree at his house, however in Chapter 7 we learn that Nathan Radley covered up the hole in the tree preventing Boo from acting out this act of kindness. We know that the people of Maycomb County knew that Boo Radley did not conform to society, however by the Radleys doing things like this it did add to the suspicion. ...read more.

The mockingbird, like Tom and Boo does nothing to harm people, and needs to be protected. When it is not, as with the case of Tom Robinson, people who seem to know no better shoot it down. I believe that the main fear of Maycomb County was change, being different, which is just like today's society. No person wants to be put out of his or her daily schedule, to make things awkward, and even if it does benefit others (in the case of this book, the Negroes), some people are just so ignorant that they cannot see beyond their own problems. The history in the novel of "To Kill A Mockingbird" is so important as it shows how cruel people can be, explaining one of the main themes of this novel (prejudice). I think that Scout showed a great example of developing an open mind, and becoming unprejudiced. If everyone was like this then maybe this book may not have been written, as the injustice in society would not be present. Scout decided early in her life that no matter how others divide other people up, whether it is over race, ethnic group, religion, or social status there is really "just one kind of folks. Folks". Maybe there is another fear, that Scout Finch could actually be right, and that we could all be the same. ...read more.