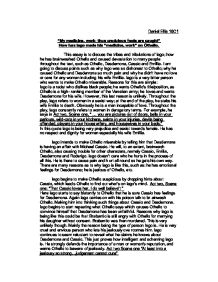 Daniel Ellis 10C1 "My medicine, work: thus credulous fools are caught" How has Iago made his "medicine, work" on Othello. This essay is to discuss the tribes and tribulations of Iago; how he has brainwashed Othello and caused devastation to many people throughout the text, such as Othello, Desdemona, Cassio and Emillia. I am going to discuss points such as why Iago was so dishonest to Othello; why he caused Othello and Desdemona so much pain and why he didn't have no love or care for any woman including his wife Emillia. Iago is a very bitter person who wants to make Othello miserable. Reasons for this are simple: Iago is a racist who dislikes black people; he wants Othello's title/position, as Othello is a high- ranking member of the Venetian army; he loves and wants Desdemona for his wife. However, this last reason is unlikely. Throughout the play, Iago refers to women in a sexist way; at the end of the play, he stabs his wife Emilia to death. Obviously he is a man incapable of love. Throughout the play, Iago constantly refers to women in derogatory terms. For example, he says in Act two, Scene one, " ... you are pictures out of doors, bells in your parlours, wild-cats in your kitchens, saints in your injuries, devils being offended, players in your housewifery, and housewives in your beds." In this quote Iago is being very prejudice and sexist towards female. ...read more.

Iago is so corruptive and scheming that he falls into his own trap when Othello attacks him. "To say my wife is fair, feeds well, loves company, is free of speech, sings, plays, and dances well: Where virtue is, these are more virtuous." Act three Scene three. This quote tells us Othello finds that being unfaithful to him is the worse thing she can do to him. So really this is perhaps his reason for acting the way he does. Later Othello says "No, Iago, I'll see before I doubt; when I doubt; prove; And on the proof, there is no more but this; away at on once with love or jealously!" This quote to Iago basically is trying to tell Iago if you prove to me that Desdemona has been unfaithful then I will believe you! Why doesn't he just ask Desdemona himself? So here Othello assures Iago he's not a jealous man. He says he's confident of his wife's virtue. Iago warns him to watch Desdemona with Cassio; she is capable of deception. Iago now tells Othello that he has seen Cassio with Desdemona's strawberry handkerchief. This was true but wasn't intended by Cassio. It was placed on his love's shoulder while she was asleep and then Cassio took it. Othello saw Cassio using it and thought immediately that Desdemona was being unfaithful and deceitful to him. "Have you not sometimes seen a handkerchief spotted with strawberries in your wife's hand?" ...read more.

Othello is confident that his service to Venice and his noble descant will make all well. I think that Iago was a very bitter and cruel man. He had no love for no one but himself and was bitterly jealous of Othello. Othello's behaviour towards Iago was very vulnerable. Act one Scene two "As double as the Duke's. He will divorce you" This quote shows that Iago has to be very intentional by claiming quite blatantly that Desdemona will have nothing to do with you as you didn't gain any consent or blessing from him to marry his daughter. Othello was also very gullible which didn't help him disbelieve Iago. I also think that Iago's jealousy caused so much trouble for people such as Cassio, Desdemona, Roderigo and Emilia. Othello's behaviour couldn't be helped because of Iago's ways of brainwashing him. Iago's brutal and ruthless actions throughout caused many deaths, at the end, which led to him being injured badly too. Unfortunately due to Iago's duplicitous ways he caused no end of trouble for Othello and Desdemona's marriage. Therefore his aggressiveness savaged the lives of Othello, Emilia, Desdemona and Cassio within the play. From this play you can see what jealousy and power can do to so many people by just one deceitful being. Iago didn't have any emotion and love for anyone but himself. He didn't get what he wanted so he caused a stink until he won, but in this case Iago's scheming intentions backfired. ...read more.