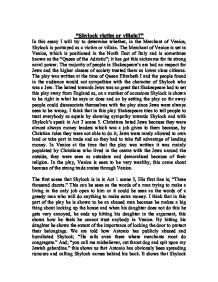 "Shylock victim or villain?" In this essay I will try to determine whether, in the Merchant of Venice, Shylock is portrayed as a victim or villain. The Merchant of Venice is set in Venice, which is positioned in the North East of Italy and is sometimes known as the "Queen of the Adriatic"; it has got this nickname for its strong naval power. The majority of people in Shakespeare's era had no respect for Jews and the higher classes of society treated them as lower class citizens. The play was written at the time of Queen Elizabeth I and the people found in the audience would not sympathise with the character of Shylock who was a Jew. The hatred towards Jews was so great that Shakespeare had to set this play away from England as, on a number of occasions Shylock is shown to be right in what he says or does and so by setting the play so far away people could disassociate themselves with the play since Jews were always seen to be wrong. I think that in this play Shakespeare tries to tell people to treat everybody as equals by showing sympathy towards Shylock and with Shylock's speak in Act 3 scene 5. ...read more.

This gains him sympathy as a victim because by saying this he is saying that because she is gone, he feels a big part of him is missing, but Salarino says; "there is more difference between thy flesh and hers than between jet and ivory." this is saying that because she has left the Jewish religion she is no longer anything like Shylock. Then Shylock says; "he was wont to call me usurer; let him look to his bond. He was wont to lend money for a Christian courtesy; let him look to his bond." This is telling us that Shylock is going to stick to the bond and if Antonio does not pay him back in the time he will take his flesh. Salarino is horrified; "Why, I am sure if he forfeit thou wilt not take his flesh. What's it good for?" he cannot understand why Shylock would want Antonio's flesh. Shylock then says why he wants it; "To feed my revenge." He wants nothing more than to feed his revenge. Shylock also begins a plea for equality; "What's his reason? I am a Jew. Hath not a Jews eyes? ...read more.

Shylock is left completely alienated from both Jews and Christians, he is left with what brought him down and lost him his money, Christianity. This leaves the audience feeling sorry for Shylock and therefore leaving the image of Shylock as a victim. Shylock can be seen as a villain in the Merchant of Venice because he can respond so quickly to the insults thrown at him throughout the play. And victim because of the loss of everything near and dear to him, his daughter, friends and possessions. I think that the abuse Shylock seemed to suffer everyday pushed him to bitterness towards the Christian community. At the end of the play Jessica, Shylock's daughter sings a Jewish song, as she is welcomed into the Christian community to show the peace and harmony that she has found. This shows that Shylock's downfall was not due to his being a Jew but was his evil villainous rage, while Jessica a Jew has found peace. Therefore I feel that Shylock was more of a villain than victim because it was his personality and how he felt was best to deal with people opposing him that lost him what he had. By Josh Congdon ...read more.