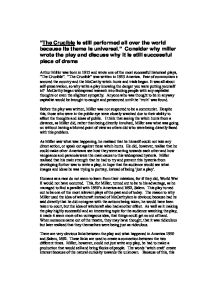 &amp;#147;The Crucible is still performed all over the world because its theme is universal.&amp;#148; Consider why miller wrote the play and discuss why it is still successful piece of drama

"The Crucible is still performed all over the world because its theme is universal." Consider why miller wrote the play and discuss why it is still successful piece of drama Arthur Miller was born in 1915 and wrote one of the most successful historical plays, "The Crucible". "The Crucible" was written in 1953 America. Fear of communism s scoured the country and the McCarthy witch-hunts and trials began. It was all about self-preservation, so why write a play knowing the danger you were putting yourself in? McCarthy began widespread research into finding people with any capitalist thoughts or even the slightest sympathy. Anyone who was thought to be in anyway capitalist would be brought to caught and persecuted until the 'truth' was found. Before the play was written, Miller was not suspected to be a communist. Despite this, those who were in the public eye were closely watched due to their ability to affect the thoughts and ideas of public. I think that seeing the witch hunts from a distance, as Miller did, rather than being directly involved, Miller saw what was going on without having a blurred point of view as others did who were being directly faced with this problem. As Miller saw what was happening, he realised that he himself could not take any direct action, or speak out against these witch-hunts. He did, however, realise that he could make other Americans see how they were acting towards each other and how vengeance and paranoia were the main cause to this widespread hysteria. Miller realised that his main strength that he had to try and prevent this hysteria from developing further was to write a play, in hope that the audience would see what images and ideas he was trying to portray, instead of being 'just a play'. Humans as a race do not seem to learn from their mistakes, for if they did, World War II would not have occurred. ...read more.

It would also make the community worried as they would believe that once a man of God's home had been transfixed by the devil, it would be so easy for an ordinary Christian to be caught . Because of the ideas of supernatural events in the play, certain language is used eg. the moon 'creeping'. This suggests that something sinister is going to happen. When the play would have been acted out, lighting effects would be used to create an eiriness about the action about to take place. "It is the low, dark and rather long living room..." Act 2; stage directions. The darkness on the room adds dramatic tension to the scene as it makes it very oppressive and closed in. The light almost represents the truth behind the dancing and singing the night before and that the truth is there but is struggling to fight against the darkness and shine through. It could also show how with all the darkness in the room, the sunlight is to a small minority, like the few who refused to tell the lie that was wanted for them and died because of it. In this time in history, it would have been a puritan community and so there would be little furniture or decoration. The simple furnishings also show the setting of this piece. The simple furnishing shows how the community was puritan and did not believe in "anything resembling theatre or 'vein enjoyment'". The houses would also be kept clean, keeping with a saying formed later on, 'Cleanliness is next to Godliness.' In this small town community, it would have been difficult to go anywhere to escape from the surroundings. This town could be described as being 'narrow' in the way of its physical properties and that of the way the community is narrow minded. The size of the town also adds to the hysteria as people cannot go and think things out clearly. ...read more.

I think that this was because as Miller wrote the play, he used it almost as an escape, to let out his true feelings and thoughts as you would in a diary. As Miller wrote the play, I think that he may have learned some things about himself as a person and maybe given people more a look into his private life than he wanted. The fact that Proctor would not sign his name resembles Miller in the way that he refused to have any effect that may promote the witch-hunts. After the play was published, Miller was taken to court and accused of being a communist. He was later found innocent of what turned out to be wide spread hysteria as in the witch-hunts. Like the witch-hunts, they all eventually stopped when many people refused to give false confessions. After writing this play, Miller said that he would not write another historical play because "[he] never thought of another period that was so relevant to ours." I think that this play is so relevant because it is so easy to get wrapped up in our own problems that we lose perspective of what the real problem is. I think that everyone must use their own conscience and decide for themselves what is the morally correct thing to do rather that following dogma as otherwise you can end up to a similar situation as that which is represented in this play. This play could turn out for some, the most useful advice that could be given to them as people who are of high status are not always the people who can rightly dictate what is to be done. Parallels can always be found between the past and present and being able to see those parallels is something that is often difficult to find. Once you have found a parallel however, you can often relate it to very many circumstances. This is why plays such as these are so successful as everyone can correlate an incident of their lives to this. ...read more.