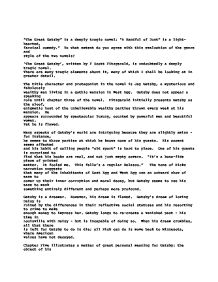 "The Great Gatsby" is a deeply tragic novel; "A Handful of Dust" is a light-hearted, farcical comedy." To what extent do you agree with this evaluation of the genre and style of the two novels? 'The Great Gatsby', written by F Scott Fitzgerald, is undoubtedly a deeply tragic novel. There are many tragic elements about it, many of which I shall be looking at in greater detail. The title character and protagonist in the novel is Jay Gatsby, a mysterious and fabulously wealthy man living in a gothic mansion in West Egg. Gatsby does not appear a speaking role until chapter three of the novel. Fitzgerald initially presents Gatsby as the aloof, enigmatic host of the unbelievably wealthy parties thrown every week at his mansion. He appears surrounded by spectacular luxury, courted by powerful men and beautiful women. Yet he is flawed. Many aspects of Gatsby's world are intriguing because they are slightly amiss - for instance, he seems to throw parties at which he knows none of his guests. His accent seems affected and his habit of calling people "old sport" is hard to place. One of his guests is surprised to find that his books are real, and not just empty covers. ...read more.

Nick is the only character at all interested in Gatsby after his death. At the funeral "nobody came" until Owl-Eyes arrives. Gatsby experiences loneliness, even in death. He has truly become a tragic, piteous character, and has reached his tragic end. * After Gatsby's funeral, Nick ends his relationship with Jordan and moves back to Minnesota to escape the disgust he feels for the people surrounding Gatsby's life. Nick reflects that just as Gatsby's dream of Daisy was corrupted by money and dishonesty, the American dream of happiness has disintegrated into the pursuit of wealth. Though Gatsby's power to transform his dreams into reality is what makes him "great", Nick reflects that the era of dreaming - both Gatsby's dream and the American dream - is over, thus making Gatsby's end a tragic end. I believe that the novel "A Handful Of Dust", written by Evelyn Waugh, has elements of comedy and farce, but can also been seen, like "The Great Gatsby", as a tragedy. The action developed in the novel closely resembles the action of classical greek tragedy. There is the rising action: Brenda's growing disaffection for her husband; the climax, the accidental death of John Andrew and Brenda's subsequent desertion of Tony, Tony's voyage to South America, and finally, the catastrophe with Tony ending up in the hands on Mr Todd. ...read more.

In "The Great Gatsby", Myrtle Wilson accidentally gets run over, an act of fate which causes Gatsby to lose his life. Both Gatsby and Tony come to a tragic end which they do not deserve. There is a significance in Tony's ending; he has ultimately gone from one imprisonment to another - from Hetton to South America. This ending is both tragic and farcical: it is tragic as Tony's traditional values have finally decayed, and it is farcical because Mr Todd makes Tony read him Dickens aloud. This is nonsensical, but at the same time, absurdly funny. Referring back to the question, I do agree with the evaluation that "The Great Gatsby" is a deeply tragic novel, but disagree that "A Handful of Dust" is a light-hearted, farcical comedy. "A Handful Of Dust" does have an underlining element of farce to it, however, the tragic elements exceed the farcical elements. Like Gatsby in "The Great Gatsby", Tony Last is a victim; a victim of society, a victim of adultery and most significantly, a victim of himself. He has a tragic flaw, and readers can sympathise with him. He reaches a tragic end which he does not, by any means, deserve. From all of these points, I would conclude that "A Handful of Dust", like "The Great Gatsby" is a deeply tragic novel. ...read more.