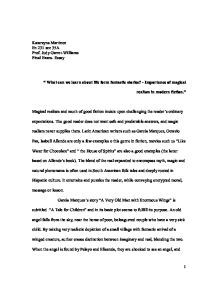 &amp;#147; What can we learn about life form fantastic stories? - Importance of magical realism in modern fiction.&amp;#148;

Katarzyna Martinez En 231 sec 35A Prof. Judy Garret-Williams Final Exam- Essay " What can we learn about life form fantastic stories? - Importance of magical realism in modern fiction." Magical realism and much of good fiction insists upon challenging the reader's ordinary expectations. The good reader does not want safe and predictable answers, and magic realism never supplies them. Latin American writers such as Garcia Marquez, Octavio Paz, Isabell Allende are only a few examples o this genre in fiction, movies such us "Like Water for Chocolate" and " the House of Spirits" are also a good examples (the latter based on Allende's book). The blend of the real expanded to encompass myth, magic and natural phenomena is often used in South American folk tales and deeply rooted in Hispanic culture. It entertains and puzzles the reader, while conveying encrypted moral, message or lesson. Garcia Marquez's story "A Very Old Man with Enormous Wings" is subtitled "A Tale for Children" and in its basic plot seems to fulfill its purpose. An old angel falls from the sky, near the home of poor, beleaguered couple who have a very sick child. ...read more.

He is very real, until the moment he flies away. Only then we can " imagine" that he never existed. Therefore he is contradiction in terms like magical realism itself. Octavio Paz's extraordinary tale of "My Life with the Wave" is a poetic description of an unlikely union. Paz experiments with composition, and techniques and takes modern story to a higher level. He plays with our imagination from the start, and lets us believe the man and "a daughter of the sea" bewildered with each other, try to establish a relationship, despite their different backgrounds. The way this two character react to one another represents the friction found so often in relationships. This is a love affair doomed from the beginning, but destined to be experienced, and we are invited for the ride. Like so many other wonderful tales from Latin cultures, this story blends imaginative events with realism. Paz encourages you to believe in incredible-a passionate love affair between a man and the wave-at the same time posing realistic problem in front of the readers-issue of transporting man's beloved on the train to Mexico City. Those contradiction leave reader a little puzzled, but very engaged in the story, opening a completely new universe before his very eyes. ...read more.

Passion and magic that connects two entirely different beings quickly dissolves and leaves them with very down-to earth problems that must be addressed if the union is to be successful. Perhaps the indication of the problem, that has appeared in the very beginning is that even in the most intimate moments, at the peak of their love, the protagonist could never understand his lover: "But I never reached to the center of her being" He was simply content by noting: "Perhaps it does not exists in waves, that secret place that renders a woman vulnerable and moral..."(535) As a typical male he discredited wave's sensibility, simply because he could not discover it. Authors use magical realism as vehicle, which transports reader from reality into the abstract universe, full of symbols and hidden meanings. They serve as a modern version of a fairy tales for grown ups, tantalizing our imagination, making us rediscover and rethink universal truths: love, human relationships, morality, virtues. Marquez and Paz mix fantastic elements with down-to-earth stories in order to create new world, one that will make us look at life from a perspective, objectively and appeal to us at a subconscious, spiritual level. It also should help us broaden our range of beliefs and possibilities. ?? ?? ?? ?? 1 ...read more.