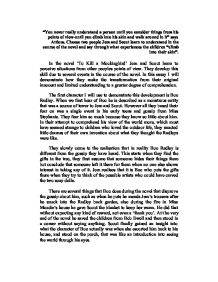 &amp;#147;You never really understand a person until you consider things from his points of view-until you climb into his skin and walk around in it&amp;#148; says Atticus. Choose two people Jem and Scout learn to understand in the course of the novel and say thr

"You never really understand a person until you consider things from his points of view-until you climb into his skin and walk around in it" says Atticus. Choose two people Jem and Scout learn to understand in the course of the novel and say through what experiences the children "climb into their skin". In the novel 'To Kill a Mockingbird' Jem and Scout learn to perceive situations from other peoples points of view. They develop this skill due to several events in the course of the novel. In this essay I will demonstrate how they make the transformation from their original innocent and limited understanding to a greater degree of comprehension. The first character I will use to demonstrate this development is Boo Radley. When we first hear of Boo he is described as a monstrous entity that was a source of terror to Jem and Scout. ...read more.

There are several things that Boo does during the novel that disprove the gossip about him, such as when he puts he mends Jem's trousers after he snuck into the Radley back garden, also during the fire in Miss Maudie's house he gave Scout the blanket to keep her warm. He did that without expecting any kind of reward, not even a 'thank you'. At the very end of the novel he saved the children from Bob Ewell and then stood in a corner without saying anything. Scout finally gained an insight into what the character of Boo actually was when she escorted him back to his house, and stood on the porch, that was like an introduction into seeing the world through his eyes. The second character I will use to show their development is Mrs Dubose. Mrs Dubose lived alone, except for a black girl. She was very old and wheelchair bound. ...read more.

During the reading sessions they stayed there for a few minutes extra each time, still not knowing that she was trying to break her addiction, they saw that she would have a fit and not listen to Jem reading most of the time. They came to see that she would occupy herself by picking ion them when the book got too boring for her. When she died and Atticus came back from her house with the box with the camellia inside, Jem finally knew why she acted the way she did. He also understood that she had a right to her own views. He had an example of what real courage is 'It's when you know that you're licked before you begin but you begin anyway and you see it through no matter what' Act I scene 11, p118 This novel is not about the adventures-or misadventures-of two children, it's the story of how they develop to a stage where they realise that there are 'mockingbirds' that no one appreciates. ...read more.