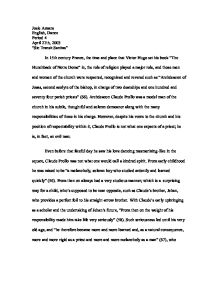 Josie Azzam English, Dance Period 4 April 27th, 2003 "Sic Transit Sanitas" In 15th century France, the time and place that Victor Hugo set his book "The Hunchback of Notre Dome" in, the role of religion played a major role, and those men and women of the church were respected, recognized and revered such as "Archdeacon of Josas, second acolyte of the bishop, in charge of two deanships and one hundred and seventy four parish priests" (66). Archdeacon Claude Frollo was a model man of the church in his subtle, thoughtful and solemn demeanor along with the many responsibilities of those in his charge. However, despite his vows to the church and his position of respectability within it, Claude Frollo is not what one expects of a priest; he is, in fact, an evil man. Even before that fateful day he saw his love dancing mesmerizing-like in the square, Claude Frollo was not what one would call a kindred spirit. ...read more.

Evil, meaning to be profoundly immoral and wrong or deliberately causing great harm or pain, especially to those who have pained you, is not Claude's aim, but is the outcome that drives him to madness, thus making him a villain. In all actuality, Claude is a bright and compassionate man at first and takes full responsibility for his abandoned brother, Jehan, and for the misshapen and retched creature, Quasimodo. Nevertheless, all that he loves is all for naught, and all his exerted emotions squandered, thus driving him to lunacy. Jehan drinks all his money away, and "was sure to be seen everywhere in Paris except at his professors' lectures" (72). Frollo then tries to educate Quasimodo, but his deafness makes it impossible to learn. The hunchback thus becomes both a emblem of failure for Frollo, but also a useful tool for "it was remarkable to see all that physical strength, developed to such an extraordinary degree in Quasimodo, placed blindly at the disposal of another person...the fascination exerted by one mind on another" (65). ...read more.

With this obsession, love, and hate, for all three go hand and in hand when speaking of Claude Frollo and Esmerelda, was the cause of making Archdeacon Claude Frollo the evil villain that he is known for today. Claude Frollo, a brilliant man with suppressed potential and immoralities, is not what one would put as the definition of an evil man, but through his non existent child hood that suppressed any sort of exertion of happiness and merriment turned him into a bitter, remorseful, and terrifying old man. Though his pursuit of science always returned his affections, all people he came to love; Jehan, Quasimodo and La Esmerelda, proved to failure after failure, through either their laziness, their inability to satisfy, or the unreturned love and dire need and instead given only hatred and fear, respectively. For a man of science cannot depend upon human emotion to always deliver, such a lesson we learn from the departure of sanity from our dearest villain Archdeacon Claude Frollo. ...read more.