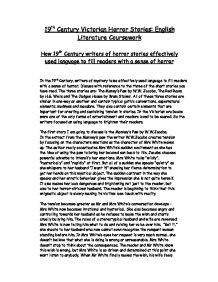 19th Century Victorian Horror Stories: English Literature Coursework How 19th Century writers of horror stories effectively used language to fill readers with a sense of horror In the 19th Century, writers of mystery tales affectively used language to fill readers with a sense of horror. Discuss with reference to the three of the short stories you have read. The three stories are: The Money's Paw by W.W. Jacobs, The Red Room by H.G. Wells and The Judges House by Bram Stoker. All of these three stories are similar in one-way or another and contain typical gothic conventions, supernatural elements, madness and macabre. They also contain certain elements that are important for creating and sustaining tension in stories. In the Victorian era books were one of the only forms of entertainment and readers loved to be scared. So the writers focused on using language to frighten their readers. The first story I am going to discuss is the Monkey's Paw by W.W.Jacobs. In the extract from the Monkey's paw the writer W.W.Jacobs creates tension by focusing on the characters emotions as the character of Mrs White wakes up. The author really accentuates Mrs White's sudden excitement as she has the idea of using the paw to bring her beloved son back to life. Jacobs chooses powerful adverbs to intensify her emotions. Mrs White talks "wildly", "hysterically" and "rapidly" at first. But all of a sudden she speaks "quietly" as she whispers to her husband "I want it!" showing her fierce determination to get her hands on this mystical object. The sudden contrast in the way she speaks and her erratic behaviour gives the impression she is not quite herself. It also makes her look dangerous and frightening not just to the reader, but also to her terror-stricken husband. The reader is beginning to think that this enigmatic object is slowly making its victims lose touch with reality. ...read more.

Instead he puts it down to a simple draft, even though there is no draft in the room. One by one all of the candles die out, the man tries to desperately relight them but with no luck. The writer's clever methods of describing this part of the story begin to frighten the reader and further mounts the tensions surrounding the man. Also the effect of the first person narrator telling the story is that it makes the reader feel as if they are there with the narrator and going through all the emotions and experience with him. In The Red Room H.G Wells focuses a lot on paranoia of the human mind and how it can lead you to believing many things. He also focuses on using adjectives, metaphors, similes etc. to convey fear and terror in to his writing. The next story I am going to discuss is The Judges House by Bram Stoker. In the extract from The Judges House Bram Stoker creates a sense of horror by focusing on the stormy weather outside as the character Malcomson - a young scholar who's searching for a place to stay, so he can study for his examinations quietly and untroubled, arrives at the house. Stoker emphasises on how the gale "seemed to shake" the old house, showing just how powerful the storm is, as the house is described as being a "heavy built house" with "heavy gables and windows". As the gale becomes more powerful it "roars and rages", this creates a picture in the readers mind that this storm is alive - almost like a ferocious creature attacking the house. The author describes the storm as making "strange, unearthly sounds" as if it comes from another world, this gives the impression that the storm is unnatural and makes the reader begin to feel that the house and situation isn't something out of the ordinary. ...read more.

The "silence" surrounding it, could give the impression that this is Malcomson's view of the situation - because there is stormy weather outside and the loud scurrying of rat's from the roof, its like he has blocked everything else out around him and is focused on the one powerful creature sitting in front of him. To conclude my essay on these three short stories, I would like to point out the similarities between them that contribute to successfully creating a sense of horror and scaring their readers. Firstly, all three stories successfully fill their readers with a sense of horror, by the authors using techniques such as suspense, dramatic impact, adjectives, metaphors, similes and many other language techniques. Secondly, each of the stories use similar themes such as typical gothic conventions, supernatural, madness and macabre. In The Monkey's Paw, one of the main characters is shown as almost losing her mind, in The Red Room, ghosts are a main factor and in The Judge's House, one of the main characters is a murderer. Thirdly, when these stories were written, books were one of the only forms of entertainment, so it was very important that the authors kept a loyal audience and satisfied their readers. Nowadays there are many other forms of entertainment so books aren't always considered very interesting or important. For example whereas in the 19th century one of their main forms of entertainment was horror books, nowadays we would prefer to watch horror films. Finally, each story has one or maybe two factors that it particularly focuses on; The Monkey's Paw - the Monkey's Paw, The Red Room - the darkness and ghosts, The Judge's House - the bell rope. By doing this it can create a lot of horror within a reader as each time they see the factor, they know that, that certain object will be the demise of the characters at the end of the story, but they don't know how. This is what scares the reader. By Hannah Evans ...read more.