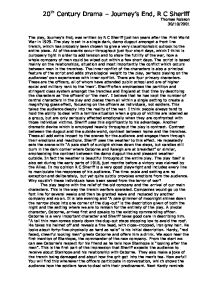 20th Century Drama - Journey's End, R C Sheriff Thomas Robson 30/10/2001 The play, Journey's End, was written by R C Sheriff just ten years after the First World War in 1929. The play is set in a single dark, damp dugout amongst a front line trench, which has probably been chosen to give a very claustrophobic outlook to the entire piece. All of the events occur throughout just four short days, which I think is purposely tight in order to add tension and to show the futility of the war, how a whole company of men could be wiped out within a few short days. The script is based mainly on the relationships, situation and most importantly the conflict which occurs between men in the trenches. The inner conflict of the characters is also a principal feature of the script and adds physiological weight to the play, perhaps playing on the audiences' own experiences with inner conflict. There are four primary characters. These are the officers, all of whom have attended public school and are of higher social and military rank to the 'men'. Sheriff often emphasises the partition and stringent class system amongst the trenches and England at that time by describing the characters as 'the officers' or 'the men'. I believe that he has kept the number of central characters in the play and places them all within a single setting to create a magnifying glass effect, focussing on the officers as individuals, not soldiers. This takes the audience deeply into the reality of the war. I think people always tend to hold the ability to deal with a terrible situation when a group of victims are labelled as a group, but are only seriously affected emotionally when they are confronted with those individual victims. Sheriff uses this significantly to his advantage. Another dramatic device which is employed heavily throughout the play is contrast. ...read more.

It is a kind of milestone in the story, approaching the final mile and the end. Just after the sergeant leaves the Colonel arrives with bad news. He starts with "spring's coming" but quickly changes his tone to pass on the deadly message from headquarters. The company is to make a raid on the enemy lines, to capture and retrieve an enemy soldier for questioning. To add to the situation the raid is also to be arranged for that very same night! More suspense is bubbling amongst the audience from this news. The Colonel suggest sending two officers and ten men, "quite enough for the purpose". Instead of choosing the condemned Stanhope asks the Colonel to choose, "Who do you suggest, sir?" he asks anxiously. The Colonel suggests Osborne, a closest friend, and Raleigh, young and innocent. I think that Sheriff has chosen these two men in order to further bring out his audience's emotions. If Osborne was killed the company would be lost and if Raleigh should die it would be a terrible loss of such a young man with a whole life ahead of him. Now one of the most shocking and suspending scenes occurs between Stanhope and Hibbert, still complaining vigilantly of his neuralgia. Hibbert complains and asks to be relieved on grounds of sickness, Stanhope simply claims he is suffering from the same symptoms. Stunned, Hibbert carries on and speaks of the doctor sending him home anyway. Stanhope ensures the Hibbert knows that he's dealt with the doctor, "I saw him this morning. He won't send you to hospital; he'll send you back here. He promised me he would", he assures. Hibbert becomes agitated and argues with Stanhope. Stanhope won't back down and tells Hibbert "You're going to stay here and see it through with the rest of us". Hibbert begins to plead with the man and attempts to pass him by. ...read more.

Stanhope reassures the boy that he will be going home. "You've got a blighty one, my boy!" he says, indicating that Raleigh is injured enough to be sent home. Raleigh's last request is for a candle, after which his fades away on the bed. Sheriff describes the sky outside as having deepened into a fiery red and I think this symbolises the end, the fire and evil. I also think that the preparation of Osborne's bed is a sign of forgiveness on Stanhope's part towards Raleigh, a resolution. These two factors have a deep effect on the audience by causing their emotions to fly free, to feel sorrow and loss, but to also feel satisfied with the resolution between the two men. With that Stanhope finishes up in the dug-out and climbs the steps into the trench and out of the scene. Raleigh is left. The shelling his now reached a furious shower of fire. A shell falls above the dug-out roof, the candle is extinguished and the doorway and roof slowly cave in. I think that Sheriff has written this for a number of reasons the extinguishing of the candle symbolises to the audience the end of life and the collapse of the dug-out symbolises the collapse of the relationship of the company. I also think that it shows the end of the conflict, which may bring good emotions to many members of the audience. These combine to leave the audience sorrowful and distressed. Personally I enjoyed reading and working on the play. I found it very engaging and emotive. It brings out so many emotions, anger, hope, happiness, regret and sadness. I like that way in which R C Sheriff explores the theme of conflict. What better a subject to choose than war? I appreciate the way in which it really shines the spotlight on the individuals in the company, their inner conflicts, their conflicts amongst each other and the conflict between powers. I can understand why Journey's End is such a successful play and is still shown in the theatre. Word count: 6,305 ...read more.