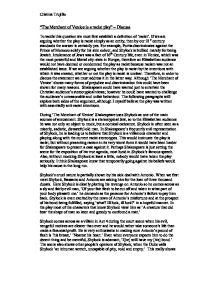 The Merchant of Venice is a racist play Discuss

"The Merchant of Venice is a racist play" - Discuss To tackle this question we must first establish a definition of 'racist'. If we are arguing whether the play is racist simply as an entity, then by our 21st century standards the answer is certainly yes. For example, Portia discriminates against the Prince of Morocco solely for his skin colour, and Shylock is bullied merely for being Jewish. Intolerance of Jews was a fact of 16th Century life, even in Venice, which was the most powerful and liberal city-state in Europe, therefore an Elizabethan audience would not have deemed or condemned the play as racist because racism was not an established issue. If we are arguing whether the play is racist by the intentions with which it was created, whether or not the play is racist is unclear. Therefore, in order to discuss the statement we must address it in the latter way. Although 'The Merchant of Venice' shows many forms of prejudice and discrimination this could have been shown for many reasons. Shakespeare could have wanted just to entertain the Christian audience's stereotypical views; however he could have wanted to challenge the audience's unreasonable and unfair behaviour. The following paragraphs will explore both sides of the argument, although I myself believe the play was written with essentially anti-racist intentions. During 'The Merchant of Venice' Shakespeare uses Shylock as one of the main sources of amusement. ...read more.

On the other hand, through Shylock, Shakespeare shows how the Jews would have been treated at the time and in turn how they felt about this. He can be seen as a sympathetic character - a victim of society who is bitter rather than evil. Throughout the play he is ill-treated simply because of his race. Many of the characters are shown to have very harsh opinions of him. 'This is the fool.', 'An inhuman wretch.' is said of Shylock when Antonio goes to him for money. Shylock wonders why he should help someone who has treated him so badly, 'You call me misbeliever, cut-throat dog, and spit upon my Jewish gaberdine.' 'I hate him for he is Christian.' says Shylock of Antonio, providing the apparent antagonist's side of the argument, which a purely racist play would not have done. Although such anti-racist signs are plain in the play, an Elizabethan audience at the time would have simply laughed at Shylock's losses. In this way, I believe Shakespeare very cleverly managed to create a play that is almost entirely two-sided and successful both ways. At the end Act 4, and the last time we see him, we may feel sympathy towards Shylock, being left with nothing. In the scene Shylock has been humiliated. Shylock was attempting to take the life of a Christian, and so he left knowing he must give Antonio half of his wealth, and the state of Venice the other half. ...read more.

However, the more educated and forward-thinking members of the audience may have grasped that Shakespeare was trying to present the situation as unjust, and have taken something from the play as I believe Shakespeare intended people to, and have been alerted as to the error of their racist ways. I believe Shakespeare, as the highly intelligent person he is known to have been, knew this would be the case, but rather than making his play more obviously anti-racist, he opted for the less controversial, more palatable and more lucrative option of entertaining people with a side dose of anti-racist concern. I believe this was a very wise decision, and I would have expected nothing less from William Shakespeare - after all, he had a reputation to uphold. He wanted to strike a balance and I think he did this very skilfully, which, along with Shakespeare's genius, is proven by the play's lasting success - through context thick and thin, from the starkly racist to the immaculately politically correct, "The Merchant of Venice" is still baffling us. There is a quasi-prophetic nature to the subtlety of the warnings in the play - it is as necessary today as it ever was, and just as provocative. So, in answer as to whether Shakespeare wrote the play with anti-racist intentions, I believe the answer is definitely yes, he just did it in a way so the play's credibility has endured not only Elizabethan critics, but centuries. ?? ?? ?? ?? Cristina Trujillo ...read more.