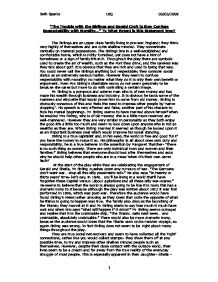 The Trouble with the Birlings and Gerald Croft is they Confuse Respectability with Morality To What Extent is this Statement true?

"The Trouble with the Birlings and Gerald Croft is they Confuse Respectability with Morality..." To What Extent is this Statement true? The Birlings are an upper class family living in pre-war England; they think very highly of themselves and are quite shallow minded. They concentrate centrally on material possessions. The Birlings live in a well-established and comfortable home, which is richly furnished, yet does not have a hint of homeliness or a sign of family life in it. Throughout the play there are symbols used to create the air of wealth, such as the Port they drink, and the careless way they talk about golf. It is obvious that they are rich and used to being that way. You could never call the Birlings anything but respectable; they consider social status as an extremely serious matter. However they seem to confuse respectability with morality; no matter what they do it is only their own benefit or enjoyment. Even Mrs Birling's charitable works do not seem genuinely to be because she cares but more to do with controlling a certain image. Mr Birling is a pompous and solemn man who is of new money and has made his wealth through business and industry. It is obvious he lacks some of the manners and etiquette that would prove him to come from old money. Birling is obviously conscious of this and feels the need to impress other people by 'name dropping'. His speech is very affected and false, another part of his charade to hide his menial beginnings. Mr Birling seems to have married above himself when he wedded Mrs Birling, who is of old money; she is a little more reserved and well-mannered. However they are very similar in personality as they both enjoy the good-life a little too much and seem to look down upon anyone who is not as wealthy as they are. ...read more.

Despite the fact the Inspector is described as a plainly-dressed man in his early fifties with no distinguishing features, he creates an impression of immense strength and importance- the sort of impression Mr Birling tries so hard to give but can never quite achieve. The Inspector seems to have a habit of making everyone around him feel inadequate and inferior whether he means to or not. He has the unnerving habit of looking people hard in the eye before he speaks to them- fixing their gaze so they can not look away. It seems to tell him things that no words could explain, and it may be why he gives the impression of knowing the answers to all his questions before even the Birlings do. This quality scares Mr and Mrs Birling who hates anyone who compromises their positions of being in control of the house and their lives, so they react with the ploy that they think he is rude and impertinent to interrogate them in their own home, to gain back some of the control. However little the older Birlings want to remember the Inspector they know that they will never forget him, and even if he has little affect on their lives because they are so stubborn and set in their ways to admit they were in the wrong, he will still leave a huge impression on them that will last until their death. The Inspector has a clever method of working; he travels round the group breaking each person down individually, by asking them questions and almost letting them find their own way into his trap. The Inspector is omniscient as he seems to know everything. Even the way the Birlings will react before they do and he sets up a trap which each member falls into. One interesting thing the Inspector does, which is what gives the Birlings their initial doubts, is the way he has a picture in his pocket which he shows to each of the family individually, and he will not let them see it at the same time. ...read more.

It is clever because after the Inspector has left Birling says "Oh look at them, can't take a joke" talking about the children, this is exactly what he said about Eric before the Inspector came which shows that he has not changed or learnt his lesson at all. It is when the phone rings saying that a girl has just died from drinking a strong disinfectant and that there is an Inspector on his way over to the house to ask some questions, that the Birlings finally start to learn their lesson. Or will they ever? It is in the last scene that the true colours of the Birlings come out. The older ones and Gerald are quite happy to forget about the whole thing, and move on without thinking back or learning anything from the experience; they seem to have no morals at all, and they only seem to care about their reputations and false respectability. However the children seem to care a little bit more about other people not just themselves, and they have some moral backgrounds. The statement "The trouble with the Birlings is that they confuse respectability with morality," is entirely true in some cases- that of the parents and Gerald. If the public really knew what sort of people they were they would no longer be respectable, far from it in fact. However the children are more respectable than their parents ever could, at least they regret their actions and try to help while they could, they long for a second chance and have genuinely learnt their lessons, which is far from what their parents have done. The play is very clever as it is obviously meant to teach the audience a lesson and not just the characters, it is supposed to make you think about the way you treat other people and how you should all be equal. J.B Priestley really sums up the troubles in society or the lack of it very well. ?? ?? ?? ?? Beth Sparks 10Q 05/03/2009 1 ...read more.