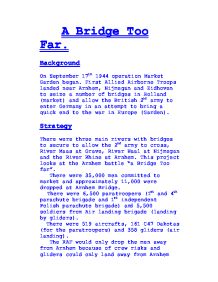 A Bridge Too Far.

A Bridge Too Far. Background On September 17th 1944 operation Market Garden began. First Allied Airborne Troops landed near Arnhem, Nijmegan and Eidhoven to seize a number of bridges in Holland (market) and allow the British 2nd army to enter Germany in an attempt to bring a quick end to the war in Europe (Garden). Strategy There were three main rivers with bridges to secure to allow the 2nd army to cross, River Maas at Grave, River Waal at Nijmegan and the River Rhine at Arnhem. This project looks at the Arnhem battle "a Bridge Too far". There were 35,000 men committed to market and approximately 11,000 were dropped at Arnhem Bridge. There were 6,500 paratroopers (1st and 4th parachute brigade and 1st independent Polish parachute brigade) and 5,500 soldiers from Air landing brigade (landing by gliders). There were 519 aircrafts, 161 C47 Dakotas (for the paratroopers) and 358 gliders (air landing). The RAF would only drop the men away from Arnhem because of crew risks and gliders could only land away from Arnhem because of ground conditions. ...read more.

Throughout the next few days there were house to house close quarter battles going on with the German army. The soldiers now had no communications because the walkie-talkies weren't working so nothing could be organised and therefore groups of soldiers were fighting small battles all over town. The commander, Major General Urkhart went around to see what was going on for himself, he got cut off and stranded in a house. When he returned to take charge communications never really improved but some use of landlines was eventually made. The soldiers held out for much longer than required, the reinforcements never came and they ran out of ammunition and food. The Germans had discovered the plan of attack from a dead soldier in a crashed glider. The Germans took over the drop zones and all food and ammunition parachuted in from the British went into enemy hands. Communications were so bad that they were unable to get the message across to the British Mainland's. ...read more.

They were all shot and wounded so decided that at night they would try to cross the Rhine but they were unable to discover a boat and the weakest were unable to swim so they returned to the town and took shelter in a cellar of a huge building. The cellar to their luck was filled with food and wine! There they waited for reinforcements to arrive. Nevertheless to their great disadvantage the Germans developed a Headquarters On the next floor above! Several times the soldiers came down into the cellar for food and drink but they hid and were not discovered until an inquisitive German came down and caught them but for some reason (perhaps because Bill bravely told him not to shoot) unexpectantly he didn't shoot them and they were took as prisoners of war. As the British advanced the Germans retreated Ferrying the prisoners back and forth on one long march. They had no food, little water and people died because of that and loss of strength. They finally reached a prison camp and were thankfully released safe at the end of the war. ...read more.