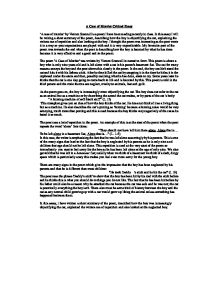 A case of murder.

A Case of Murder Critical Essay 'A case of murder' by Vernon Scannell is a poem I have been reading recently in class. In this essay I will be writing a short summary of the poem, describing how the boy is objectifying the cat, explaining the writers use of repetition and also looking at the boy. I thought the poem was interesting as the poet wrote it in a way so your expectations are played with and it is very unpredictable. My favourite part of the poem was towards the end when the poet is describing how the boy is haunted by what he has done because it is very effective and a good end to the poem. The poem 'A Case of Murder' was written by Vernon Scannell in narrative form. ...read more.

This metaphor gives you an idea of how the boy thinks of the cat. He does not think of it as a living thing but as a machine. He also describes the cat's purring as 'buzzing' because a buzzing noise would be very annoying, much more than purring and this is used because the boy thinks very negatively of the cat as he hated it so much. The poet uses a lot of repetition in the poem. An example of this is at the start of the poem when the poet repeats the word 'alone' four times: "They should not have left him there alone, Alone that is... To be left alone in a basement flat, Alone that is..." (L. 1-5) In this case, the writer is emphasising the fact that he was left alone assumingly by his parents. ...read more.

18) The poet uses the phrase 'Daddy's stick' to show that the boy has been hit by his dad with the stick before and he thinks this is what you should do to things you do not like. The fact that he has been hit before by his father could also be a reason why he attacked the cat because the cat was safe and he was not; the cat is practically everything the boy isn't. There also must be some kind of history between the boy and the cat as any normal child growing up with a cat would grow up liking the animal unless something has happened between them. In this essay, i have written a short summary of the poem, described how the boy was increasingly objectifying the cat, explained the writers use of repetition and also looked at the neglected boy. ...read more.

This essay makes some apt points; however as a response it is underdeveloped and the number of points covered is limited. When analysing a poem it is really important to consider the importance of structure which has not been looked at in this essay.