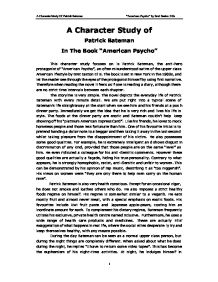 A Character Study Of Patrick Bateman

A Character Study of Patrick Bateman In The Book "American Psycho" This character study focuses on is Patrick Bateman, the anti-hero protagonist of "American Psycho", an often misunderstood satire of the upper class American lifestyle by Bret Easton Ellis. The book is set in New York in the 1980s, and let the reader see through the eyes of the protagonist himself by using first narrative. Therefore when reading the novel it feels as if one is reading a diary, although there are no strict time intervals between each chapter. The storyline is very simple. The novel depicts the everyday life of Patrick Bateman with every minute detail. We are put right into a typical scene of Bateman's life straightaway at the start when we see him and his friends at a posh dinner party. Immediately we get the idea that he is very rich and lives his life in style. The foods at the dinner party are exotic and Bateman couldn't help keep showing off his "platinum American Express Card". ...read more.

During the day Bateman can be seen as a normal upper class person, but during the night things are completely different. When asked about what he does during the night, he replies "I have to return some video tapes". This has become the euphemism of his night-time activities. At night, he indulges himself in murdering innocents and raping unfortunate individuals. Sometimes the shock of doing these things gets to him, and he starts to have panic attacks. It's during these panic attacks we see really how weak he is. He often confesses his crimes to total strangers. However they always ignore him and think it's a joke. This, combined with how characters in the book often mistakes one person for another, is Ellis' way of representing how in the modern world we don't really care about who we are talking to. One thing that cannot be ignored about the novel is how explicit it is. Rapes, murders and grotesque actions are described with nothing left out. ...read more.

Indeed in one scene he discovered that another person's business card was of a better quality and design than his and thus started to have intense jealousy for that person. This can be interpreted as Ellis' satire directed at the greed of humans and our desperate struggle to have the best of everything. After he commits his final murder, Bateman does not feel good and "high" as he described it. Instead, he feels nothing. Not even killing can satisfy him now. It is astounding how he was never suspected of any of the numerous murders he committed. At the end we discover that he may have imagined all his acts of atrocity. This deliberate ambiguity is the only mercy Ellis has for this truly evil character. Despite this, I pity Patrick Bateman, for he tried to find pleasure, like we all do but in other ways, and failing to do so. In the end, he is left "hollow" with no emotion left whatsoever. It's pitiful how one can become mentally deranged on one's quest for personal gain. ?? ?? ?? ?? A Character Study Of Patrick Bateman "American Psycho" by Bret Easton Ellis 1 ...read more.