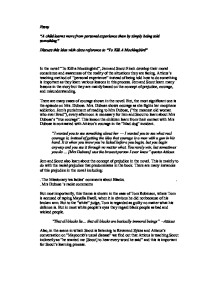 &quot;A child learns more from personal experience than by simply being told something&quot;. Discuss this idea with close reference to &quot;To Kill A Mockingbird&quot;

Essay "A child learns more from personal experience than by simply being told something" Discuss this idea with close reference to "To Kill A Mockingbird" In the novel "To Kill a Mockingbird", Jem and Scout Finch develop their moral conscience and awareness of the reality of the situations they are facing. Atticus's teaching method of "personal experience" instead of being told how to do something is important as they learn various lessons in this process. Jem and Scout learn many lessons in the story but they are mainly based on the concept of prejudice, courage, and misunderstanding. There are many cases of courage shown in the novel. But, the most significant one is the episode on Mrs. ...read more.

Jem and Scout also learn about the concept of prejudice in the novel. This is mainly to do with the racial prejudice that predominates in the book. There are many instances of this prejudice in the novel including: . The Missionary tea ladies' comments about Blacks. . . Mrs Dubose 's racist comments But most importantly, this theme is shown in the case of Tom Robinson, where Tom is accused of raping Mayella Ewell, when it is obvious he did not because of his broken arm. But to the "white" judge, Tom is regarded as guilty no matter what his defence is. But in most white people's eyes they regard black people as bad and wicked people. ...read more.

Scout, I think I'm beginning to understand why Boo Radley's shut up in the house all the time...it's because he wants to stay inside. -Jem The misunderstanding between the Blacks and the Whites is also evident. Even though the Ewell's are "White Trash" they are still regarded higher than a humble, church-going "nigger". This is because of the assumption that: "That all blacks lie... that all blacks are basically immoral beings" -Atticus Therefore we can see that due to Atticus's teaching technique of: "A child learns more from personal experience than by simply being told something" We can see that Jem and Scout have learnt much more than if they were told about it all. And we can see that by the end of the story they have matured about theirs views on people and their surroundings. ...read more.