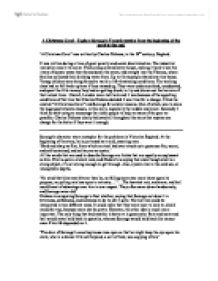 A Christmas Carol - Explore Scrooges Transformation from the beginning of the novel to the end.

A Christmas Carol - Explore Scrooge's Transformation from the beginning of the novel to the end. 'A Christmas Carol' was written by Charles Dickens, in the 19th century, England. It was written during a time of great poverty and social discrimination. The industrial revolution was at its worst. Thick smog covered every house, making it hard to see the rivers of human waste that flowed down the street, and straight into the Thames, where families collected their drinking water from. Up to thirty people shared one tiny house. Young children were being forced to work in life-threatening conditions. The working class had no fall-back options if they messed up. They were undernourished, uneducated, and spent the little money they had on getting drunk, to try and drown out the horrors of their actual lives. Overall, London was a hell hole and it was because of the appalling conditions of the time that Charles Dickens decided it was time for a change. I think he created "A Christmas Carol" and Scrooge for several reasons. One of which, was to show the huge gap between classes, in this story, especially the middle and lower. Secondly I think he was trying to encourage the richer people to help as many of the poor as possible. Charles Dickens clearly believed all throughout the story that anyone can change for the better if they want it enough. Scrooge's character was a metaphor for the problems in Victorian England. At the beginning of the story, he is portrayed as a cold, uncaring man. 'Hard and sharp as flint, from which no steel had ever struck out a generous fire; secret, and self-contained, and solitary as an oyster.' ...read more.

Is its pattern strange to you?"' In this quote Marley tells Scrooge of the chain he forged throughout his evil life, which he is now forced to wear in his eternal wanderings of the world. The pattern he refers to is in his description earlier. 'The chain he drew was clasped about his middle. It was long, and wound about him like a tail; and it was made of cash-boxes, keys, padlocks, ledgers, deeds, and heavy purses wrought in steel.' The pattern is made of things that Scrooge is defiantly well acquainted with, for they are his life. It is showing Scrooge that the very things he believes his life depends upon will later be used to chain him up, and weigh him down. Marley's ghost then goes on to tell Scrooge about his own chain. '"It was full as heavy as this, seven Christmas Eves ago. You have laboured on it, since. It is a ponderous chain!" He tries to sway Scrooge, by describing it as 'ponderous', long and heavy. Scrooge still cannot understand why this would happen to his business partner, because he was always good at his job... He voices this to Marley. '"Business!" cried the Ghost, wringing its hands again. "Mankind was my business. The common welfare was my business; charity, mercy, forbearance, and benevolence, were, all my business. The dealings of my trade were but a drop of water in the comprehensive ocean of my business!" Marley is contradicting Scrooge here, because these are all the things Scrooge wants nothing to do with. Marley is trying to put the world in perspective for him, and trying to show him that money is not what matters. ...read more.

Not only that, but he looked pleasant, which is a huge change than how people would've normally described him. He goes to his nephew's house, and surprises him with his presence. '"It's I. Your uncle Scrooge. I have come to dinner. Will you let me in, Fred?"' He is finally accepting Fred as family, my calling himself Fred's uncle. He never used to even talk to Fred, especially not to admit he was family. The next morning Scrooge waits for Bob to come in, late. He attempts to act like his former self, by having a go at him for being late. '"It's only once a year, sir," pleaded Bob, appearing from the Tank. "it shall not be repeated. I was making rather merry yesterday, sir" "Now, I'll tell you what, my friend," said Scrooge, "I am not going to stand this sort of thing any longer. And therefore," he continued, leaping from his stall and giving Bob such a dig in the waistcoat that he staggered back into the Tank again: "and therefore I am about to raise your salary!" Scrooge has changed so much, that he finds it hard to even imitate his former self. He calls Bob his friend, which he would never have done before. At the very end of the story, it says 'Scrooge was better than his word. He did it all, and infinitely more; and to Tiny Tim, who did not die, he was a second father.' In some ways, it was thanks to Tiny Tim that Scrooge changed so well. After seeing Tiny Tim with such hope, even though his outlook was so grim, Scrooge was already prepared to change. I think a lot can be learnt from this novel. ...read more.