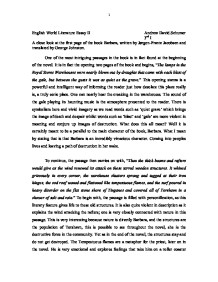 A close look at the first page of the book Barbara, written by J&amp;oslash;rgen-Frantz Jacobsen and translated by George Johnston.

English World Literature Essay II Andrew David Schumer 3rd I A close look at the first page of the book Barbara, written by J�rgen-Frantz Jacobsen and translated by George Johnston. One of the most intriguing passages in the book is in fact found at the beginning of the novel. It is in fact the opening two pages of the book and begins, "The lamps in the Royal Stores Warehouses were nearly blown out by draughts that came with each blast of the gale, but between the gusts it was as quiet as the grave." This opening stanza is a powerful and intelligent way of informing the reader just how desolate this place really is, a truly eerie place. One can nearly hear the creaking in the warehouses. The sound of the gale playing its haunting music is the atmosphere presented to the reader. There is symbolism here and vivid imagery as we read words such as 'quiet grave' which brings the image of death and despair whilst words such as 'blast' and 'gale' are more violent in meaning and conjure up images of destruction. ...read more.

This can be seen as flickering flames. But it should also be noted that the flames did not go out. In the next passage, we are in the second paragraph; "In the ships' stores Ole the Sockmaster and Rebekka's Paul were sorting seagoing jerseys. They sat inside a lantern's small circle of light. Elsewhere the warehouses lay in darkness. But in the shop many were gathered." This is the beginning of human contact in the novel and it would appear as though it brings light into this very dark and stormy place. Almost keeping the darkness at bay, the two characters have the mundane task of sorting jerseys. This task is merely another foreshadowing of the characters of Torshavn, their jobs are small and may seem insignificant, yet these small jobs have a big task of highlighting the few important jobs in the town, such as the general dealer and the judge and priest. ...read more.

They lounged against the counter, tallow candles shone on their slack faces and made shadows around their wet, red-rimed eyes. They spat and yawned gloomily." In the final part of the passage, we see the men, true to form of this very relaxed scene, leaning back and idly chatting. The paragraph uses different professions to describe these men and to signify the versatility of them. The concept of tallow candles is quite a contrast to the beginning of the scene that we are given of a very windy setting. This also shows the relaxed atmosphere of the store, it appears boring yet cosy at the same time. Their slack faces and wet, red-rimmed eyes are significant in the sense that they show signs of intoxication and more than that, it can also represent the men's stress levels. The first page is clearly a foreshadowing of what is to come and an important metaphor is drawn, on that Barbara is as nature. Wild and free. Word count: 1027 ?? ?? ?? ?? 2 1 ...read more.