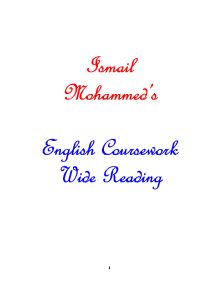 Ismail Mohammed's English Coursework Wide Reading Year 11B A Comparative Study between Harper Lee's 'To Kill a Mockingbird and George Eliot's 'Silas Marner' I will endeavour to compare and contrast the two books mentioned above. The resemblances and diversities are elaborated below: Setting: 'To Kill a Mockingbird': The setting of every story has a significant role in it as it affects how the people behave and it also gives us an insight to the way they treat each other and allows us to understand the procedure of certain events. "To Kill a Mockingbird" is set in a small town in Alabama in the southern states of America. Although Maycomb is a fictitious town, based on Harper Lee's home town Monroeville, real places like Montgomery are referred to in the novel. In order to comprehend and be able to decipher how the atmosphere of the time affected both Harper Lee and the creation of her characters, it is necessary to consider the society and morality of both the time in which it was written (late 1950s) and the time in which it is set (1933-5). Maycomb is a microcosm (a mini-world) of American society in the 1930s. It is only concerned with its own problems mainly of poverty and unemployment, but is still anticipating drastic changes, both from within and outside its world. ...read more.

His character delineates the significance of love, and that man is not an island, he cannot survive by himself, he needs somebody beside him. Silas Marner serves as a moral lesson of the consequences of obliteration when such a heavenly gift such as love is rejected. Religion and the Position of the Church: Religion is an element which differentiates the two novels and is a big issue which can influence many changes to the society. To Kill a Mockingbird bird: Harper Lee's intention is not to be blasphemous but is to satirise not he Christian faith itself, but ridicule those people who profess Christianity but fail to implement it into their life. Moreover, there are the contrary genuine Christian believers like Atticus. For instance, he tells Scout that the only reason that he is defending Tom Robinson is that his religion obliges him to do it even though he is aware of the consequent unpopularity he will suffer from by doing so. "...I couldn't go to church and worship God if I didn't try to help that man" (Chapter 11) Apart from Atticus, the only other people we know implement their religion into their lives are the black people of Maycomb. So by this, we can see that the black community live the religion and the white community simply talk it. ...read more.

'Silas Marner': George Eliot uses a far more complicated form of English than Harper Lee. Her sentences are very long where Harper Lee uses very short ones. George Eliot also uses dialects and colloquialism to add realism to the story although it is only one dialect. She also uses all the above bullet points. However, her description is very extensive as she forms 'round' characters. By comparison, I would say that the characters in 'To Kill a Mockingbird' are rather 'flat' as they can usually be described with a few sentences. Harper Lee distinguishes the two communities by their language use where George Eliot distinguishes them by their class and physical appearance as there is only one community thus there is only one dialect which is a big contrast between the two novels. Unlike Harper Lee, George Eliot is free to a sea of vocabulary as she is the author so she has no limitations with possible expressions. Like Harper Lee, George Eliot also uses pathetic fallacy to set the scene like when Eppie's mother died in the cold snow in front of Silas's door. The fact that it was cold and snowy sets the scene that we should feel sympathy because it is rather tragic. This document was downloaded from Coursework.Info - The UK's Coursework Database 1 ...read more.