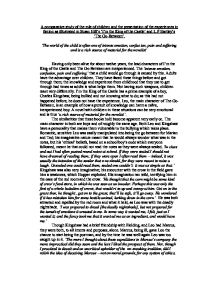 A comparative study of the role of children and the presentation of the experiences in fiction as illustrated in Susan Hill's 'I'm the King of the Castle' and L.P Hartley's 'The Go-Between'.

A comparative study of the role of children and the presentation of the experiences in fiction as illustrated in Susan Hill's 'I'm the King of the Castle' and L.P Hartley's 'The Go-Between'. 'The world of the child is often one of intense emotion, confusion, pain and suffering and is a rich source of material for the novelist' Having only been alive for about twelve years, the lead characters of I'm the King of the Castle and The Go-Between are inexperienced. The 'intense emotion, confusion, pain and suffering' that a child would go through is caused by this. Adults have the advantage over children. They have faced these things before and got through them; the knowledge and experience from childhood that they use to get through bad times as adults is what helps them. Not having such weapons, children react very differently. I'm the King of the Castle has a prime example of a boy, Charles Kingshaw, being bullied and not knowing what to do; as this had not happened before, he does not have the experience. Leo, the main character of The Go-Between, is an example of how a pursuit of knowledge can harm a na�ve, inexperienced boy. A novel with children in these situations can be very emotional and is thus 'a rich source of material for the novelist'. ...read more.

The only person Kingshaw had was his Mother and, in an effort to fit in, his mother sided with Hooper over Kingshaw in most situations even though Kingshaw was innocent. '"Charles, how can you speak like that, how can you be so naughty?" "I didn't touch him." "Then why ever should Edmund say that you did? I am quite sure he would have no reason to tell an untruth." "Oh yes, he would, he's a sneaky little liar, he'd say anything. Well I didn't touch him." "Oh, what a way to speak! You make me so ashamed of you."' In The Go-Between it was the adults, the supposed carers, who were doing the bullying. In a way, it was similar to I'm the King of the Castle, as it was not only Hopper bullying Kingshaw, but the adults, too, bullying them into being friends and siding with Hooper. The similarity in the way the boys relate, Leo and Marcus in The Go-Between and Kingshaw and Hooper in I'm the King of the Castle, is also different. Both pairs of friends are fighting physically and verbally. However in the case of Marcus and Leo it is in jest; it is the way they relate as friends, although they are almost rivals. 'Often when we talked there was a spirit of verbal rivalry between us; we trod the knife-edge between affection and falling out;' Yet ...read more.

In our society, a twelve year old boy would have no difficulty in coming to the conclusion that these secret 'business' notes were in fact love letters but in the 1900s there was no media or social acceptance of discussing personal relationships. 'Totally ignorant as I was of love affairs, and little as I knew about their conventions, I felt sure that when a girl was engaged to a man she did not write letters to another man calling him 'darling'. She might do it up until the day of engagement, but not after. It was automatic; it was a rule: like leaving the wicket at cricket when you were out; and it scarcely crossed my mind that to comply with it might be painful.' However the idea that a twelve year old boy might kill himself as a result of bullying is more believable as this still happens in today's society as it did in the 1950s. Both books have a suicide at the end though in I'm the King of the Castle it was the bullied and in The Go-Between it was the bully. Though these books hold some similarities they are also quite different. Though they both present the children in the same way, having similar personalities and experiences, they present those experiences differently. The role of these children also differs; Kingshaw is seen as a victim, and, though Leo is a victim too, in some ways he is almost considered the hero of the novel. ...read more.