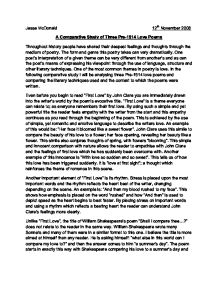 Jesse McDonald 12th November 2008 A Comparative Study of Three Pre-1914 Love Poems Throughout history people have shared their deepest feelings and thoughts through the medium of poetry. The form and genre this poetry takes can vary dramatically. One poet's interpretation of a given theme can be very different from another's and as can the poet's means of expressing his viewpoint through the use of language, structure and other literary techniques. One of the most common themes in poetry is love. In the following comparative study I will be analysing three Pre-1914 love poems and comparing the literary techniques used and the context to which the poems were written. Even before you begin to read "First Love" by John Clare you are immediately drawn into the writer's world by the poem's evocative title. "First Love" is a theme everyone can relate to; as everyone remembers their first love. By using such a simple and yet powerful title the reader feels empathy with the writer from the start and this empathy continues as you read through the beginning of the poem. This is achieved by the use of simple, yet romantic and emotive language to describe the writers love. An example of this would be: "Her face it bloomed like a sweet flower". ...read more.

Unlike John Clare in "First Love" he appears to have no interest in true love, but merely desires to make love to the women. An example is: "At every pore with instant fires". This is an example of the young man's urgent passion for immediate love. There is no romance to it; he is only after one thing! The young man's intensions become even more apparent as we look further on in the poem. On the final two lines Andrew Marvell uses a clever pun: "Thus, though we cannot make our sun / Stand still, yet we will make him run". The word "sun" is a homophone of "son" and is used to great effect in this example. He uses "sun" to say that he cannot stop the inevitable passing of time and "son" to mean they will make a baby that will be able to "run". By saying that he cannot stop time the young man is reinforcing his argument that the women should "seize the moment" and they should "make" a son together. This is also an example of his immaturity. It would appear their relationship is still in the early stages and despite the fact she is "coy" he is already thinking about children and only wants to take advantage and use her. ...read more.

Though "To his coy mistress" has less substance and background to it; I really enjoyed the wittiness and style. I like the way it makes a mockery of the idealised love poem and instead portrays a rather crude form of love. I was particularly impressed with the skillful use of puns and metaphoric language throughout and the use of iambic pentameter. With regards to "Shall I compare thee...?" I like the iambic pentameter and the use of rhyming couplets; however I find it more difficult to relate to when compared with "First Love". I'm also not very fond of the ending. It is almost as if Shakespeare could not think of a suitable ending, so he devised one which could basically fit onto any poem. The mystery surrounding "Shall I compare thee...?" is quite an attractive feature to it. Who is the youth who Shakespeare writes about in so many of his sonnets? Is the love described merely platonic? It almost certainly, will never truly be known. Each one of the poems I studied displays numerous literary techniques which I will be trying to adapt into my own future work. I have enjoyed analysing the three poems and have learnt how even poems in the same genre can vary dramatically in both style and content. This in my opinion is the beauty of poetry. It thrives on open-mindedness and demonstrates how varied our different interpretations of the same genre are. ...read more.