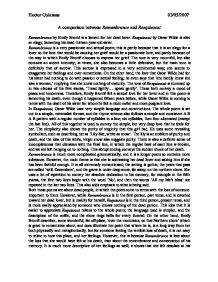 A comparison between Remembrance and Resquiescat - Remembrance by Emily Bront&amp;euml; is a lament for her dead lover. Resquiescat by Oscar Wilde is also an elegy, lamenting his dead thirteen-year-old sister.

A comparison between Remembrance and Resquiescat Remembrance by Emily Bront� is a lament for her dead lover. Resquiescat by Oscar Wilde is also an elegy, lamenting his dead thirteen-year-old sister. Remembrance is a very passionate and sexual poem; this is partly because that it is an elegy for a lover so the love that would be causing her grief would be a passionate love, and partly because of the way in which Emily Bront� chooses to express her grief. The tone is very mournful, but also contains an ardent intensity; at times, she also becomes a little defensive, but the main tone is definitely that of sorrow. This sorrow is expressed in a very sentimental way; she seems to exaggerate her feelings and over-romanticise. On the other hand, the love that Oscar Wilde had for his sister had nothing to do with passion or sexual feeling; he even says that 'she hardly knew she was a woman,' implying that she knew nothing of maturity. The tone of Resquiescat is summed up in two clauses of the first stanza, 'Tread lightly.... speak gently'. These both convey a mood of peace and tenderness. Therefore, Emily Bront� felt a sexual love for her lover and in this poem is lamenting his death, even though it happened fifteen years before, ...read more.

Both these poems are about dead people, in which the poets come to terms with the loss of someone important to them. However, while Remembrance is in the first person, past tense, and is directed toward her dead lover, but is mainly for herself, Requiescat is in the third person, present tense, and is more easily appreciated by someone who knows nothing of the dead person. This idea that it is easier to appreciate Requiescat relates to the whole poem; the language used is simpler, and the description of the coffin, and the stone rings bells for every funeral. On the other hand, Emily Bront� describes, some wonderful, far off place, 'over the mountains, on that Northern shore' which is great to romanticise about, and does illustrate her point that where he is, is a long way from her both physically and metaphorically, but for someone feeling the terrible loss of death, it is not easy to relate to how this place, and her feelings. However, this is because Remembrance is less about the loss that she would have felt at his death, than about the remembrance and consecration of his memory. It is much more descriptive of her feelings as well; it shows that she felt desolate at his death, but then learnt to live a joyless life. ...read more.

But Emily Bront� has obviously not done this for her lover, and has hung onto his memory, so that even fifteen years later, she is still haunted by him. The idea of the progression of grief is important in both poems; Oscar Wilde begins by saying "speak gently, she can hear the daisies grow", but moves on to realise that "she cannot hear Lyre or sonnet". This shows that he has progressed, and that his grief has developed. Emily Bront� also progresses, but as her poem is in the past tense, this is less vivid; she describes how she "weaned (her) young soul from yeaning after thine" and so progressed from "tears of useless passion" to the next stage of grief. I think that Requiescat is a more effective elegy because he manages to convey a genuine sense of sorrow and melancholy, but for me Emily Bront� fails to really make me pity her because she has over-dramatised her feelings of sorrow, and guilt, which really should not dominate her life in such a way after fifteen years. I also find that the simplicity and subtlety of that Oscar Wilde employs is more effective in conveying his feelings, and he makes his poem easier to relate to. Hector Guinness 03/05/2007 ...read more.