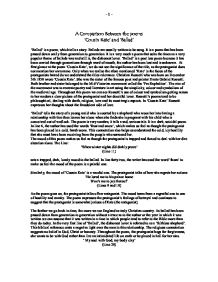 A Comparison Between the poems 'Cousin Kate' and 'Ballad' 'Ballad' is a poem, which tells a story. Ballads are usually written to be sung. It is a poem that has been passed down orally from generation to generation. It is a very much a poem that suits the times as a very popular theme of ballads was and still is, the dishonest lover. 'Ballad' is a poet less poem because it has been carried through generations through word of mouth, the author has been lost and is unknown. At first glance at the poem 'Cousin Kate', we do not see the significance of the title, as the protagonist does not mention her own name. Only when we realise the afore mentioned 'Kate' is the focus of the protagonists hatred do we understand the titles relevance. Christina Rossetti who was born on December 5th 1830 wrote 'Cousin Kate'. She was the sister of the famous poet and painter Dante Gabriel Rossetti. Both brother and sister belonged to the Mid-Victorian movement called the 'Pre Raphelites'. The aim of the movement was to recreate poetry and literature in art using the simplicity, colour and symbolism of the medieval age. Throughout this poem we can see Rossetti's use of colour and symbolism getting across to her readers a clear picture of the protagonist and her deceitful lover. Rossetti's poems tend to be philosophical, dealing with death, religion, love and its most tragic aspects. In 'Cousin Kate' Rossetti expresses her thoughts about the fraudulent side of love. 'Ballad' tells the story of a young maid who is courted by a shepherd who woos her into having a relationship with him then leaves her alone when she finds she is pregnant with his child who is conceived out of wedlock. ...read more.

The images that the words in 'Ballad' conjure tend to be pessimistic. I have already mentioned line six in which the author uses the words 'frost and snow' to summon harsh, unloving images in the mind of the reader. Line eleven ' When winter nights did darkly prove' talks of the advanced stages of pregnancy. Pregnancy described as 'dark' is a sinister take on the traditional joyous event of childbirth and what precedes it. There are various references to death and the final grave in this poem, such as line sixteen 'O when will green grass cover me?' These images are frequent. Line twenty-four says ' Left me to want a bed of clay'. This line also calls up images of the cold grave. 'When thou without a friend shalt be Weeping on a stranger's knee' (Lines 35 and 36) The words in these lines invoke images of loneliness. The protagonist is thinking about the effects of her suicide on her baby. She sees his life as a lonely one, having to depend on a few kind strangers who take pity on him. She also talks about how her baby's life will be hard from the start because of the fateful situation in which he was born in line forty-two. 'I've made thy pillow on a thorn'. There are positive images in 'Ballad'. ' When summer brought no fears to fright,' (Line 9) Pictures of a warm happy summer spent in the company of her lover are conjured in the mind of the reader. The shepherd that fathered her baby had promised the protagonist riches and finery as she says in line twenty on 'He promised beds as fine as silk'. ...read more.

The protagonist in 'Cousin Kate' because her cousin betrayed her and she has lost what respect people within her rural community had for her. Both poems have been written by the first person, which makes it easy for us to seen how ruined women feel. Both 'Cousin Kate' and 'Ballad' have the focal theme of love. Men with power have rejected both female protagonists, wealth and status, both have experienced severe losses of innocence and trust, and both expected marriage and were left without. Both poems us the word 'maid' to depict their innocence and purity. Both 'Ballad and 'Cousin Kate' talk of betrayal and abandonment by lovers or family. Each protagonist is of working class status living among country fold and have been cheated by men of a higher status and consequently suffer hurt, pain and heartache. However, notwithstanding their similar themes of love and ruined women, they have many differences. For example the protagonist in 'Cousin Kate' briefly thinks about death whereas the persona in 'Ballad' seriously considers it as a solution to her dire situation. In 'Cousin Kate', the Lord remains within society and marries Kate but in 'Ballad' the shepherd disappears without a trace. 'When it puckered up with shame And I sought him, he never came' (Lines 7 and 8) For the persona in 'Cousin Kate' her baby is her 'pride' and joy and yet for the protagonist in 'Ballad' her baby is a shame and a humiliation. Each poem looks at ruined relationships with men and the birth of illegitimate children, comparing the two poems has brought to light the different ways in which women deal with them. An Essay Comparing the two Poems 'Cousin Kate and 'Ballad' By Naima Khan 10'O ?? ?? ?? ?? - 1 - ...read more.