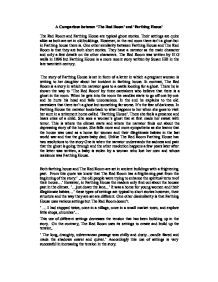 A Comparison between 'The Red Room' and 'Farthing House'

A Comparison between 'The Red Room' and 'Farthing House' The Red Room and Farthing House are typical ghost stories. Their settings are quite alike as both are set in old buildings. However, in the red room there isn't a ghost but in Farthing house there is. One other similarity between Farthing House and The Red Room is that they are both short stories. They have a narrator as the main character and only a few details on the other characters. The Red Room was written by H G wells in 1896 but Farthing House is a more recent story written by Susan Hill in the late twentieth century. The story of Farthing House is set in form of a letter in which a pregnant woman is writing to her daughter about her incident in farthing house. In contrast, The Red Room is a story in which the narrator goes to a castle looking for a ghost. There he is shown the way to 'The Red Room' by three caretakers who believe that there is a ghost in the room. When he gets into the room the candles starts to go off one by one and he hurts his head and falls unconscious. In the end he explains to the old caretakers that there isn't a ghost but something far worse. It's the fear of darkness. ...read more.

The readers know from the beginning that this a ghost story with a sceptical and open-minded narrator as the first sentence is; 'I can assure you that it will take a very tangible ghost to frighten me...' Likewise in Farthing House the storyteller starts the story with: ' I have never told you this I have never told anyone...' These openings capture the readers attentions and make them want to read on. They also expect that there will be a ghost in The Red Room as one is mentioned in the first sentence of the story. Conversely, they don't know that Farthing House is a ghost story as no ghost is mentioned at the beginning of the story. The styles of writing the stories are very different however, the style used to narrate The Red Room is more successful as it makes the readers believe that there is a real ghost throughout the story but there isn't: 'There is neither ghost nor countess in the room...but worse, far worse...and that is in all its nakedness- fear!' The readers only find out that there isn't a ghost in the resolution and the way that the storyteller keeps the suspense is very effective and makes the story more believable as there is no ghost. On the other hand, in Farthing House there is a real ghost and the readers find out more about the ghost bit by bit, like a puzzle. ...read more.

In the red room, we know that the story I quite old as the language is more old-fashioned when compared to Farthing House. 'Eight and twenty years I have lived in this house'. The use of an older language makes it tenser and also increases fear in the story. The way that the shadows are described to convey panic is also very effective: 'The impression of someone crouching to waylay me' By describing the shadows as characters, the author is making the reader more alert for a ghost. However, in Farthing House the writer uses repetition to show that there is tension. 'That feeling of melancholy came over me again'. This use of repetition is very useful as it creates tension again and again. It also helps the readers to understand how the narrator is feeling and this might make the readers more curious and nervous. The Red Room is a more successful story because the description of the setting created atmosphere and more tension than in Farthing House. It also had a reasonable ending as the reader is meant to feel that the story was complete with a satisfactory and definite ending. Unlike The Red Room Farthing House has two resolutions to the story, this creates the effect that the story has more resolutions and that it has not really ended. I prefer the red room because I liked the way that H G wells created a lot of suspense and then had a surprising ending. The build up of tension from the beginning was also very effective. ...read more.