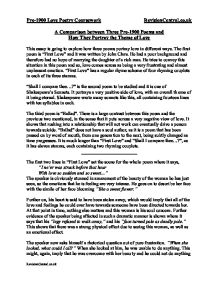 Pre-1900 Love Poetry Coursework RevisionCentral.co.uk A Comparison between Three Pre-1900 Poems and How They Portray the Theme of Love This essay is going to explore how three poems portray love in different ways. The first poem is "First Love" and it was written by John Clare. He had a poor background and therefore had no hope of marrying the daughter of a rich man. He tries to convey this situation in this poem and so, love comes across as being a very frustrating and almost unpleasant emotion. "First Love" has a regular rhyme scheme of four rhyming couplets in each of its three stanzas. "Shall I compare thee...?" is the second poem to be studied and it is one of Shakespeare's Sonnets. It portrays a very positive side of love, with an overall theme of it being eternal. Shakespeare wrote many sonnets like this, all containing fourteen lines with ten syllables in each. The third poem is "Ballad". There is a large contrast between this poem and the previous two mentioned, in the sense that it puts across a very negative view of love. It shows that rushing into a relationship that will not work can eventually drive a person towards suicide. "Ballad" does not have a soul author, as it is a poem that has been passed on by word of mouth, from one generation to the next, being subtly changed as time progresses. It is much longer than "First Love" and "Shall I compare thee...?", as it has eleven stanzas, each containing two rhyming couplets. ...read more.

The original passion for someone fades over time. Shakespeare often refers to nature in this poem as well. The woman is compared to a "Summers Day." She is even said to be "more lovely and more temperate" than a summers day, which really stresses how beautiful she must be. This is similar to "First Love" when it refers to a "sweet flower." The beauty of the natural world is used to show just how beautiful these women were. I think that this is a very effective way to describe someone, as we can all see the natural world around us today, and we can compare it to these women. We have never seen a picture of them but we can imagine them quite easily. Further on, a different meaning of "Sommer" is used. The speaker talks of summer belonging to the woman. He is saying that she is so radiant that she, and everything around her, seems to be in a permanent state of summer time. He also talks about an "eternall Sommer," and that it, "shall not fade." Again, he is pointing towards her beauty, and his love for her, being eternal. The theme of love having a kind of immortality is continued where the speaker says that, "nor shall death brag thou wandr'st in his shade." Even when she dies, if she has not done so already, his love for her will never fade. The personification of Death makes death seem even more ominous and powerful, but as love can still prevail over it, the strength of the feelings the speaker has for this woman are magnified. ...read more.

Again, the use of the heart is seen in next stanza where it says that the shepherd has two hearts. This obviously points towards him stealing hers. The girl now starts to really contemplate suicide. She shudders to think of what sort of father the shepherd will be for her baby. The girl compares her heart to brass, as she did her lover's heart to steel earlier on. "My heart would break - but it is brass." Her heart has been hardened and she has been hurt so much that nothing can affect her any more. At this point she starts to think about taking both the baby's and her own life. She has been driven to the depths of despair and the only way out for her is death. Throughout the whole poem, tension has been building, and in this final stanza, the poem reaches its climax. Earlier she had said, "My soul with God, my body clay," but now, in the last line of the poem, she says, "Our souls with God, our bodies clay." Rushing into a relationship with someone she did not really love has left her contemplating suicide for both herself and her baby. So in conclusion, it can be seen that these three poems do portray love in different ways. There are many poetic devices and words that the authors have used in their description of love. Some describe love as being eternal, while others show that it fades over time. Overall then, a large variety of perceptions of love are shown in these poems, which together give a vivid picture of love itself and the feelings of those involved. RevisionCentral.co.uk ...read more.