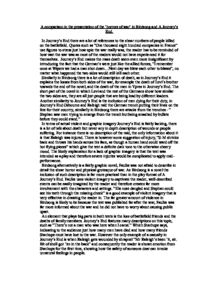 A comparison in the presentation of the 'horrors of war' in Birdsong and A Journey's End.

A comparison in the presentation of the 'horrors of war' in Birdsong and A Journey's End. In Journey's End there are a lot of references to the shear numbers of people killed on the battlefield. Quotes such as "One thousand eight hundred companies in France" use figures to stress just how epic the war really was, the reader has to be reminded of how vast the war was as most of the readers would not have experienced it for themselves. Journey's End makes the mass death seem even more insignificant by introducing the fact that the German's were just like the allied forces, "I remember once at Wipers we had a man shot down...Next day we blew each other to blazes", no matter what happened the two sides would still kill each other. Similarly in Birdsong there is a lot of description of death, as in Journey's End it explains the losses from both sides of the war, for example the death of Levi's brother towards the end of the novel, and the death of the men in Ypres in Journey's End. ...read more.

The likely explanation for a lack of graphic imagery is that the text was intended as a play and therefore severe injuries would be complicated to apply mid-performance. Birdsong alternatively is a fairly graphic novel, Faulks was not afraid to describe in detail the shear horror and physical grotesque of war. As Birdsong is a novel the inclusion of such description is far more practical than in the play format of A Journey's End. Faulks uses violent imagery to captivate the reader, well-described events can be easily imagined by the reader and therefore creates far more involvement with the characters and settings. "His nose dangled and Stephan could see his teeth through the missing cheek" is a good example of violent imagery that is very effective in drawing the reader in. The far greater amount of violence in Birdsong is likely to be because the text was published far after the war, Faulks was far more informed about the war and he did not have to worry about causing public upset. ...read more.

When certain characters die in Birdsong there is a genuine feeling of remorse not only from the characters but from the reader as well, for instance the death of characters like Jack Firebrace whom the plot has followed a fair way through novel are killed off so easily and mercilessly. Birdsong's use of graphic description and character relations emphasise the death of familiar characters superbly, almost forcing the reader to genuinely feel for their deaths. Journey's End portrays a very psychological side of warfare, the complete meaningless killing of soldiers is highlighted many times throughout the text. "General wants us to make a raid to find out who's coming into the opposite line here", the troops are far more informed than the higher ranking officers who have never really seen how easily men die after leaving the trench. Higher ranks would spend most of their days sat in a dugout or even further away from the front lines. Complete lack of appreciation for human life is also expressed by the officers, "Still it'll be awfully nice if the brigadiers pleased", this quote show a disregard for the many men that had died, they got what they wanted so they could not care less. ...read more.