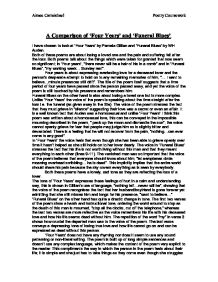 A Comparison of 'Four Years' and 'Funeral Blues'. I have chosen to look at 'Four Years' by Pamela Gillian and 'Funeral Blues' by WH Auden. Both of these poems are about losing a loved one and the pain and suffering felt after the loss. Both poems talk about the things which were taken for granted that now seem so significant; in 'Four years', "there never will be a hair of his in a comb" and in 'Funeral Blues', "my working week... Sunday rest". Four years is about expressing everlasting love for a deceased lover and the person's desperate attempt to hold on to any remaining memories of him, "... I want to believe...minute presences still drift". The title of the poem itself suggests that a time period of four years have passed since the person passed away, and yet the voice of the poem is still touched by his presence and remembers him. Funeral Blues on the other hand is also about losing a loved one but is more complex. Unlike 'Four Years' the voice of the poem is speaking about the time straight after the loss i.e. the funeral (as given away in the title). ...read more.

clocks, cut off the telephone," whereas the last two verses are more reflective as the voice remembers his life with his deceased love and how his life seems dead without him. The repetition of the word "my" in verse 3 shows how crucial the departed man was to the voice of the poem. The last verse conveys a depressing tone of losing true love and how life cannot go on and can be expressed as dead without this person. 'Four Years' does not have any rhyming nor does it seem to use any sound patterning or non-literal writing. The poem is built up of long simple sentences and doesn't use any complex language, which makes the content of the poem very explicit to the reader. This compliments the way in which the person in the poem feels about their life; it is simple and she just has to take things as they come even though she struggles to let go of reminders of her husband. The irregular rhythm of this poem also expresses how the last four years have been very hectic and that the person has experienced little normality in their life. ...read more.

In the last verse Auden uses some strong imagery related with destroying nature, this shows that the love was natural yet did not "last forever" so the voice of the poem does not see the need for guidance "sun" or any other essential elements in life any more seeing as his most essential component has been taken. In my opinion both these poems are very different when studied closely although they appear to be about the same thing. 'Funeral Blues' is overall showing a more distorted and distressed approach to the death of a loved one where as 'Four Years' shows the acceptance of death even though physical reminders still exist which may have caused pain. I prefer 'Four Years' because I think it is easy to relate to and it illustrates how time eases the pain of a death gradually and on going suffering is not such an issue. 'Funeral Blues' gave the impression that the death of a lover was not only the end for the deceased person but also for the person left and that life had no meaning after. This is a very emotional, touching poem but it is not easy to relate to, as its meanings are very intricate in my opinion. ?? ?? ?? ?? Aimee Carmichael Poetry Coursework ...read more.