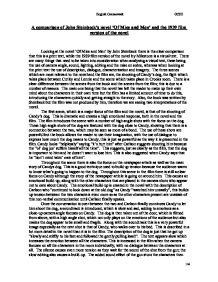 A comparison of John Steinbeck's novel 'Of Mice and Men' and the 1939 film version of the novel Looking at the novel 'Of Mice and Men' by John Steinbeck there is the clear comparison that this is a print text, while the 1939 film version of the novel by Milestone is a visual text. There are many things that need to be taken into consideration when analysing a visual text, these being the use of camera angle, sound, lighting, editing and the mise en sc�ne, whereas when looking at the print text the use of description, dialogue, characterisation and imagery. The three scenes which are most relevant to the novel and the film are, the shooting of Candy's dog, the fight which takes place between Curley and Lennie and the scene which takes place in Crooks room. There is a clear difference between the scenes from the book and the scenes from the film; this is due to a number of reasons. The main one being that the novel has left the reader to make up their own mind about the characters in their own time but the film has a limited amount of time to do this, introducing the characters quickly and getting straight to the story. Also, the book was written by Steinbeck but the film was not produced by him, therefore we are seeing two interpretations of the novel. The first scene, which is a major focus of the film and the novel, is that of the shooting of Candy's dog. This is dramatic and creates a high emotional response, both in the novel and the film. The film introduces the scene with a number of high angle shots with the focus on the dog. These high angle shots of the dog are featured with the dog close to Candy, showing that there is a connection between the two, which may be seen as more of a bond. ...read more.

That something more terrible is yet to happen, and the props emphasise the drama of the incident and the outcome. This scene is described in the book as also being a terrible incident, focusing both on the descriptions of George and Lennie, where "blood ran down Lennie's face, one of his eyes was cut and closed" and Curley was "white and shrunken". These two descriptions are very different from each other, representing Lennie as the powerful figure, whereas before he was not. The next important scene is that of Crooks' room, a main focus because this is where the dreams of the future on the ranch are talked about. Also, Crooks is the character that is discriminated against. Focusing on this in the novel and the film, is highly unusual for the time of the novel and the film. Which were both produced in the early part of the twentieth century, when showing whites and blacks together was unusual. Milestone opens the first scene with a high angle close up shot of Crooks rubbing a "bottle of liniment" onto his back. This emphasises the fact that Crooks is old and disabled due to injury to his back. This is featured in the book by the repetition of Crooks touching his spine every now and then. The description is a major focus within the novel and is created in the film with the use of props but there is not nearly as much involvement of the room in the film. This is because it was important to emphasis the difference in the conditions between the men to highlight the discrimination of the time. The discrimination is seen through Crooks' isolation because the props used in the dark, mysterious setting of his room, which seems to be significantly neater than the other bunkhouses, which have been seen in the film. Yet this is not a major focus in the film unlike in the novel where there is a lot of description about the "harness-room" and the description of Crooks' bunk which is a "long box filled with straw, on, which his blankets were flung". ...read more.

This is shown with the use of long camera shots and slow editing, this comes as a surprise, especially as it appears at the end of the scene. Other than some alterations, the two scenes from both the texts they appear to very similar, only with the book adding more detail. This detail is only left out because it is there in front of the audience with the use of props. The detail of Crooks' room is not a major focus within the film, unlike it is in the novel where Steinbeck uses simplistic style and language which allows the reader to understand the significant themes of the story. Also the literary techniques that he uses consists of monosyllabic words, which helps to set the scene of Crook's room along with the use of cinematic effects. This helps his descriptive writing and allows us to feel as if we are in the harness room with Crooks and Lennie. This helps to portray the realism of the story, something that the film is not able to do. In conclusion I prefer Steinbeck's novel to the film by Milestone, mainly because the novel allows the reader to make up their own mind about the characters and the setting of the novel with the use of the imagination. The way that Steinbeck combines detailed descriptions of the scenery with the more vague descriptions of the characters to draw the reader into the novel and stimulate their imaginations is very effective, this does much more for the audience than the film. Steinbeck leaves more to the imagination of the reader than Milestone's film version. This is more rewarding because the reader has developed sympathy for George and Lennie through their own imagination and not because they have been influenced by their appearances on the film. Milestone's opinions on the characters are apparent in the film because it is his own interpretation of the novel. However by reading the novel, each individual is able to make up their own interpretation of the novel. ?? ?? ?? ?? English Coursework GCSE 1/4 ...read more.