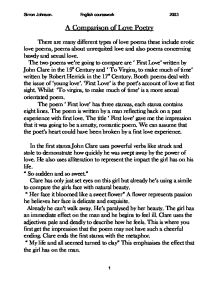 A Comparison of Love Poetry.

A Comparison of Love Poetry There are many different types of love poems these include erotic love poems, poems about unrequited love and also poems concerning bawdy and sexual love. The two poems we're going to compare are ' First Love' written by John Clare in the 19th Century and ' To Virgins, to make much of time' written by Robert Herrick in the 17th Century. Booth poems deal with the issue of 'young love'. 'First Love' is the poet's account of love at first sight. Whilst 'To virgins, to make much of time' is a more sexual orientated poem. The poem ' First love' has three stanzas, each stanza contains eight lines. The poem is written by a man reflecting back on a past experience with first love. The title ' First love' gave me the impression that it was going to be a smutty, romantic poem. We can assume that the poet's heart could have been broken by a first love experience. In the first stanza John Clare uses powerful verbs like struck and stole to demonstrate how quickly he was swept away by the power of love. He also uses alliteration to represent the impact the girl has on his life. ...read more.

The first line translates to 'seize the day' but Herrick refers to a rose, which is a symbol of youth and innocence. "Old time is still-a-flying" Herrick uses personification to tell virgins that time goes quickly and that it's important to make the most of your time. The first stanza has a warm, content atmosphere but the last line demonstrates that life won't always be so happy. " Tomorrow will be dying" Herrick uses superlative adjectives to create a powerful beginning to the second stanza. " The glorious lamp of heaven, the sun," Herrick compares a man's penis to a glorious lamp of heaven. This could be seen as taking advantage of the fact that a lot of young women were religious. He makes it sound as if God has given permission for virgins to have sex. Humans can't live without the Sun so maybe he's trying to say you can't live without sex. " And nearer he's to setting." He's trying to tempt virgins to have sex before the male gets disinterested. In the third stanza Herrick makes the point that when you are young you are beautiful and full of confidence but as you age your confidence and looks disappear. ...read more.

Herrick's poem is addressed to virgins who could be seen as na�ve and vulnerable. In some aspects the poems are very different but in some they are very similar. The tone of the poems is quite different but in some instances the style of writing is quite similar. * * * * Out of the two poems I prefer 'First Love' because I like the fact it's so melodramatic. It's quite amusing how a man can fall in love so suddenly and then be heartbroken without actually speaking to the girl. The lack of punctuation makes the poem seem surreal as if the man's life is stuck on Fast Forward. Everything in the poem happens so quickly; It's a unique style, which operates effectively. 'To virgins, to make much of time' is addressed to the female sex and in my opinion is fairly repetitive. The poet encourages virgins to have sex at an early age. Herrick has a stereotypical view of virgins and his message is repeated throughout the poem. Herrick doesn't use as many poetic devises as Clare and I found it much harder to understand. These two romantic poems demonstrate that there is a lot of love poetry. Each poem is addressed to different people and each poem has a different message. Simon Johnson. English coursework 2003 1 ...read more.