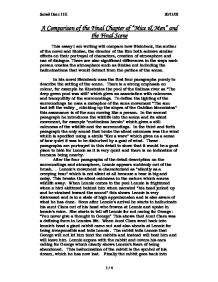 A Comparison of the Final Chapter of &quot;Mice &amp; Men&quot; and the Final Scene

A Comparison of the Final Chapter of "Mice & Men" and the Final Scene This essay I am writing will compare how Steinbeck, the author of the novel and Siniise, the director of the film both achieve similar effects on their portrayal of characters, creation of atmosphere and use of dialogue. There are also significant differences in the ways each person creates the atmosphere such as Siniise not including the hallucinations that would detract from the pathos of the scene. In his novel Steinbeck uses the first four paragraphs purely to describe the setting of the scene. There is a strong emphasis on colour, for example he illustrates the pool of the Salinas river as "The deep green pool was still" which gives an association with calmness and tranquillity of the surroundings. To define the lighting of the surroundings he uses a metaphor of the suns movement "The sun had left the valley _ climbing up the slopes of the Gabilan Mountains" this assonance is of the sun moving like a person. In the second paragraph he introduces the wildlife into the scene and its silent movement, for example "motionless heroin" which gives a still calmness of the wildlife and the surroundings. ...read more.

Lennie tried to look at George but George again told him to look to look at the river and again George innocently did. To show his reliance on George it says "Lennie obeyed him" even though Lennie could sense something wasn't right. George then assured Lennie of the story by saying "Ever'body gonna be nice to you. Ain't gonna be no more trouble. Nobody gonna hurt nobody nor steal from'em" this also shows the reader why George is about to kill Lennie. George now heard the footsteps in the brush and said to Lennie "I never been mad _. That's a thing I want ya to know" he then raised the gun, steadied it and he pulled the trigger. Steinbeck characterizes the echo of the tragic death using a metaphor "the crash of the shot rolled up the hills and rolled down again. Lennie then slowly dropped to the ground without quivering. George shivered and looked at the gun, and then he threw it from him. The group came bursting into the clearing and slim went to George telling him "A guy got to sometimes" which is a similar event to the dog being shot by Carlson instead of Candy but this time it was the right person. ...read more.

This scene was not included in the book as the book makes the men come in and see Lennie dead there with Slim comforting George and them going off together but I think the director wanted to emphasise the fact that George was now alone and their dream was lost. The scene of the train dissolves into the last scene of an old event when Lennie and George working together and walking away together. There is a sound bridge of the sad music passing on but with no diegetic sound to show that it could be George's memory of them together. Finally the last scene fades away into the credits. In conclusion to my essay it is clear that there are more than significant differences and comparisons between the film and the novel. But both Steinbeck and Siniise used there roles to create the surrounding atmosphere to the best way to suit there situation. For example Siniise did not include the hallucinations as he thought it would detract the pathos of the scene and in addition included George on the train by himself to accentuate Georges loneliness of travelling alone now like everyone else. 2,028 Word Essay Sohail Deen 11H 30/11/02 1 / 4 ...read more.