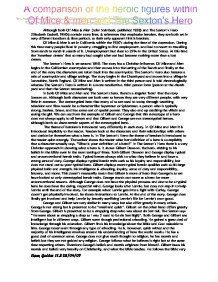 A comparison of the heroic figures within Of Mice &amp; Men (John Steinbeck, published 1938) and The Sexton's Hero (Elizabeth Gaskell, 1950s)

Although both Of Mice & Men (John Steinbeck, published 1938) and The Sexton's Hero (Elizabeth Gaskell, 1950s) contain story lines, & references that emphasise heroism, they are both set in very different locations & time periods, so their only apparent link is heroism. Of Mice & Men is set in California within the 1930's during the time of the depression. During this time many people lived in poverty, struggling to find employment, and had to resort to travelling from ranch to ranch in search of it. Unemployment had risen to 25% in the United States. At this time the 'American dream' that so many had sought after out had become nothing more than a lost dream. The Sexton's Hero is set around 1850. The story has a Christian influence. Of Mice and Men begins in the Californian countryside and then moves into the setting of the Ranch and finally at the end of the story the characters are taken back into the countryside. The Sexton's Hero also features a mix of countryside and village settings. The story begins in the Churchyard and moves into a village in Lancashire, North England. Of Mice and Men is written in the third person and is told chronologically whereas The Sexton's Hero is written in a more recollective, third person form (person at the church yard and then the Sexton remembering). In both Of Mice and Men and The Sexton's hero, there is a singular 'hero' that the story focuses on. Although both characters are both seen as heroes they are very different people, with very little in common. ...read more.

Both men are not violent by nature and would not start a fight for no apparent reason, but both George and also, I believe Gilbert will use violence if necessary. Although he doesn't personally get involved with Lennie and Curley's fight he eventually encourages Lennie to fight back. Gilbert's attitudes to violence like many other aspects of his life are guided by his beliefs in God and the bible. Gilbert is almost something of a pacifist and will never use violence as he believes it is not morally correct or seen to be correct by his faith. George will respect a group's leader, such as Slim, and will follow advice and instruction but he is also strong minded himself and dislikes unpleasant or unjust people such as Curley. George is wary of most people he meets apart from Lennie and also Slim who he unusually opens up to. Gilbert responds to others fairly and pleasantly even when he is being treated unjustly by them. Even when Gilbert was taunted for not fighting he still did not fight back because as the Sexton said, "as plain as words could speak, to fight out the quarrel. He told me then, he had no quarrel against me". George is respected by others but also counted the same as everyone else. Others do not think of him as a leader, except possibly by Lennie. Most others see him as an honest peer. He is accepted into groups. Gilbert is treated very differently during the course of the story. ...read more.

Her view of heroism is a very Christian one. In Of Mice and Men Steinbeck tries to tell us that heroism can be seen by ordinary people, that different people have different heroes and to make the best out of what we have. I think Gilbert is much more of a stereotypical hero than George. Each character has in some way or form helped others around them and this it what I believe make them heroes. Although The Sexton's Hero appears to be more successful in defining because of its direct links to heroism and traits a hero, I do not believe it to be any more successful at showing a hero than Of Mice and Men. Although the story shows what a hero is thought to be, and how to be one, it only shows one type of hero. Of Mice and Men shows you do not have to save a person's life to be a hero, and this I personally prefer. At the beginning of The Sexton's Hero a question is asked, "How would you define a hero?" The answer given after a long pause was "My idea of a hero is one who acts up to the highest idea of duty he has been able to form, no matter at what sacrifice." Both George and Gilbert easily fit this description, they have stood up to their duties and responsibilities and have been forced to make sacrifices along the way, which shows neither man is more of a hero than the other. Liam Guiler 11.8 28/04/07 ...read more.