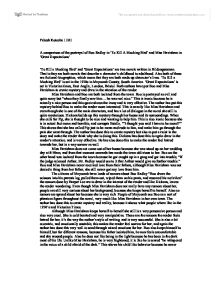 Pritesh Kotecha 11M1 A comparison of the portrayal of Boo Radley in 'To Kill A Mocking Bird' and Miss Havisham in 'Great Expectations' 'To Kill a Mocking Bird' and 'Great Expectations' are two novels written in Bildungsroman. That is they are both novels that describe a character's childhood to adulthood. Also both of these are fictional-biographies, which mean that they are both made up character's lives. 'To Kill a Mocking Bird' is set in the 1930s in Maycomb County, South America. 'Great Expectations' is set in Victorian times, East Anglia, London, Bristol. Both authors have put Boo and Miss Havisham to create mystery and draw in the attention of the reader. Miss Havisham and Boo are both isolated from the town. Boo is portrayed as evil and quite scary but "when they finally saw him... he was real nice." This is ironic because he is actually a nice person and this quote shows the irony and is very effective. The author has put this mystery behind Boo to make the reader more interested. This is exactly like Miss Havisham and even though she is one of the main characters, and has a lot of dialogue in the novel she still is quite mysterious. ...read more.

Boo also keeps himself to himself, but for different reasons, because his father isolated him, he now feels uncomfortable and shy around people. Also he does not like being in the light because he has been in the dark most of his life. Unlike Miss Havisham, he is very frightened, it is like he is scared "he whispered in the voice of a child afraid of the dark." This shows his child like behavior because he never really got to grow up because he was trapped inside the house all day everyday. The author has done this to make the reader feel sorrow towards him and again is the style of Harper Lee and she has done it very well. Both Boo's and Miss Havisham's houses are dull, very dark creating a sort of eerie effect. They both have a type of mystery to them. Boo's house's "shutters and doors are always closed" shows how he is isolated not allowed to see anything. Miss Havisham's house "was of old brick, and dismal, and had a great many iron bars to it." This shows how she has isolated herself from the town. ...read more.

And there are many messages that are put through Boo but the main ones that Harper Lee is trying to put through is Boo is symbolised as a mocking bird and " it's a sin to kill a mocking bird because all they do is sing their hearts out for you." This shows the innocence of Boo. The other message she is trying to put through is that "You never really know a man until you step into his shoes and walk around in them." This shows to never judge a book by its cover! Also never listen to rumors because they'll always get you into trouble. The author has done this very effectively in showing what might happen if you do listen to rumors and also shown the consequences. Out of the two characters I find Boo more interesting. This is because he is a phantom figure throughout the novel. I find Miss Havisham weird and strange but not really mysterious. So I think that Harper Lee has succeeded more because Boo does not have much dialogue, he is just talked about a lot and that is why he is more mysterious because it got me thinking when I was reading the novel on weather he was really like that or not. ...read more.