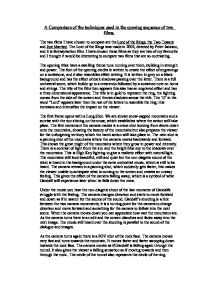 A Comparison of the techniques used in the opening sequence of two films - the Lord of the Rings, the Two Towers and Just Married.

A Comparison of the techniques used in the opening sequence of two films. The two films I have chosen to compare are the Lord of the Rings, the Two Towers and Just Married. The Lord of the Rings was made in 2002, directed by Peter Jackson, and it is fantasy/action film. I have chosen these films as they are two of my favourite and I thought it would be interesting to compare two films that are so contrasting. The opening titles have a swelling theme tune running over them, building in strength and power. The font of the opening credits is written to create the effect of engravings on a tombstone, and it also resembles elfish writing. It is written in grey on a black background and has the effect of dark shadows passing over the letter. There is a full orchestral score, which builds up to a crescendo followed by a sustained note on horns and strings. The title of the film then appears this also has an engraved effect and has a three dimensional appearance. The title is in gold to represent the ring, the lighting comes from the side of the screen and throws shadows across the title. The 'O' in the word "Lord" appears later than the rest of the letters to resemble the ring; this increases and intensifies the impact on the viewer. The first frame opens with a Long Shot. We are shown snow-capped mountains and a sunrise with the sun shining on the snow, which establishes where the action will take place. ...read more.

After the loud diagetic sound of the staff being thrust into the bridge there is a flash of brilliant white light, which lights Gandalf up. The camera pans into the Balrogs face, this is an extreme close up of the monster, it creates a feeling of unease, as we do not know what is happening around it. There is a tilt shot of the bridge going diagonally across the screen; it is lit from underneath shinning on the underside or the bridge. The bridge breaks away falling out of shot and the balrog falls with it. As Gandalf is caught by the Balrog and falls the camera cuts to a close up of Frodo and Merry so we can see the horrified expressions on their faces. Gandalf falls in to a bottomless tunnel as if in slow motion which gets darker as he falls deeper. Gandalf's costumes and beard are a symbol of the religious overtones that run through this fantasy film. The film also about courage and how a small man can win over extreme evil. In complete contrast to The Lord of the Rings, Just Married is a chick flick/romantic comedy. It was made in 2003 and directed by Robert Simons. The film opens with a blurred image, which is out of focus, which the first credits come up. Unlike The Lord of the Rings where we focus only on the credits we are instantly given an idea of the sort of film we are watching. ...read more.

As they go down the escalator a horn is heard in the music, which sounds brassy and aggressive. There is a low angle shot looking up the esculator as she steps on to it. This gives shows us the feeling of her power which is followed by a POV shot on the part of the threatened but smug looking character. This changes to a close up of her face centre screen, the music has vocals brought in which also sound aggressive helped by the 'bang' which is repeated. This is similar to the way the music grows more powerful and urgent to raise the tension when the camera enters the mines in Lord of the Rings. In Just Married there is still a lot of natural light from glass walls, windows and roofs. There are a lot of quick camera changes from one character to another and although we can see the airport is still very busy our focus is on the characters who have all the action. In conclusion although the two films were very different, one being an action/fantasy and the other a chick flick romantic comedy, the way the camera and lighting were used in some shots were very similar. Both directors obviously work in very different ways and have different styles but the techniques used to create their effects were the same. The scales of the films were on such a different level and so contrasting, one was ore inspiring with a sense of fear and danger all the way through whilst the other was comfortingly realistic, although anger was shown it was easy to watch and ordinary. ...read more.