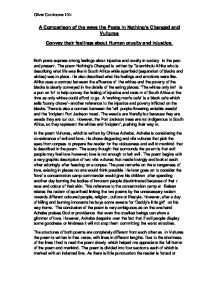 A Comparison of the ways the Poets in Nothing's Changed and Vultures Convey their feelings about Human cruelty and injustice. Both poets express strong feelings about injustice and cruelty in society in the past and present. The poem Nothing's Changed is written by Tatamkhulu Afrika who is describing what life was like in South Africa while apartheid (separation of blacks and whites) was in place. He also described what his feelings and emotions were like. Afrika uses a contrast between the affluence of the whites and the poverty of the blacks is clearly conveyed in the details of the eating places. 'The whites only inn' is a pun on 'in' to help convey the feeling of injustice and racism of South Africa at the time as only whites could afford to go. A 'working man's cafe' is a black cafe which sells 'bunny chows'- another reference to the injustice and poverty inflicted on the blacks. There is also a contrast between the 'tall purple-flowering amiable weeds' and the 'incipient Port Jackson trees'. The weeds are friendly but because they are weeds they are cut out. ...read more.

However, after a day of killing and burning innocents he buys some sweets for 'Daddy's little girl' on his way home. The conclusion of the poem is very ambiguous as on the one hand Achebe praises God or providence that even the cruellest beings can show a glimmer of love. However, Achebe despairs over the fact that if evil people display some goodness or kindness it will not stop them committing the worst atrocities. The structures of both poems are completely different from each other as in Vultures the poem is written in free verse, with lines in different lengths. Due to the shortness of the lines I had to read the poem slowly which helped me appreciate the full horror of the poem and mankind. The poem is divided into four sections each of which is marked with an indented line. As there is little punctuation the reader is forced or dragged into considering the horror and the idea of the evil that plagues mankind. However, in Nothing's changed the structure is very different when compared to Vultures. ...read more.

There is still oppression by the whites towards the blacks. Injustice, inequality and racism still remain and the bitterness, hatred and anger the blacks felt will never leave. Even though Nothing's Changed is more personal and subjective about the poet's lifestyle and experiences, Vultures is more contrasting, more philosophical and a reflective journey with more movement. Both poems have an equally powerful and shocking message to cry out. A similar use of alliteration and effects are used in both poems and monosyllables and stanzas are present. ("Small, round, hard stones click under my heals.") A graphic description of the ugliness of nature helps compare the two poems by linking how everything is evil no matter how good. Both poems convey a negative and a depressing view on humanity. The cyclical structure helps suggests even if laws were abolished injustice and inequality would still and always exist. The images produced in the readers head would be more shocking if the reader read Vultures compared to Nothing's Changed. Symbols of evil are compared to in nature as Vultures and in humanity as the commandant at Belsen concentration camp. The details are more vivid in Vultures but both messages are equally powerful and equally shocking. ?? ?? ?? ?? Oliver Cockayne 10N ...read more.