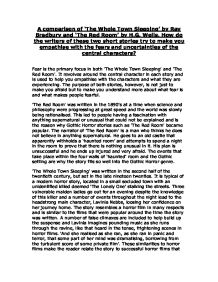 A comparison of 'The WholeTownSleeping' by Ray Bradbury and 'The Red Room' by H.G. Wells. How do the writers of these two short stories try to make you empathise with the fears and uncertainties of the central characters?

A comparison of 'The Whole Town Sleeping' by Ray Bradbury and 'The Red Room' by H.G. Wells. How do the writers of these two short stories try to make you empathise with the fears and uncertainties of the central characters? Fear is the primary focus in both 'The Whole Town Sleeping' and 'The Red Room'. It revolves around the central character in each story and is used to help you empathise with the characters and what they are experiencing. The purpose of both stories, however, is not just to make you afraid but to make you understand more about what fear is and what makes people fearful. 'The Red Room' was written in the 1890's at a time when science and philosophy were progressing at great speed and the world was slowly being rationalised. This led to people having a fascination with anything supernatural or unusual that could not be explained and is the reason why Gothic Horror stories such as 'The Red Room' became popular. The narrator of 'The Red Room' is a man who thinks he does not believe in anything supernatural. He goes to an old castle that apparently withholds a 'haunted room' and attempts to spend a night in the room to prove that there is nothing unusual in it. His plan is unsuccessful and he ends up injured and very afraid. The events that take place within the four walls of 'haunted' room and the Gothic setting are why the story fits so well into the Gothic Horror genre. 'The Whole Town Sleeping' was written in the second half of the twentieth century, but set in the late nineteen twenties. It is typical of a modern horror story, located in a small secluded town with an unidentified killed deemed 'The Lonely One' stalking the streets. Three vulnerable maiden ladies go out for an evening despite the knowledge of this killer and a number of events throughout the night lead to the headstrong main character, Lavinia Nebbs, loosing her confidence on her journey home. ...read more.

The obvious fear throughout the story of this isolated location will help the reader understand Lavinia's fears when she reaches the ravine. Similarly, in 'The Red Room', the people in contact with the narrator at the start of the story help to increase the reader's fear of the 'Red Room'. The old man who is present at the very beginning of the story repeats the same phrase 'It's your own choosing' four times to the narrator of the story. This phrase is very suggestive. It's almost as if the man is saying; it's your choice whether you go to that room, but you will be choosing to be thoroughly stupid if you do. The age of the old man indicates he is experienced, and therefore 'wise'. The wisdom of this old man will lead the reader to have faith in what he is saying and so his apprehension about the room will lead to the reader having a fear of the 'Red Room' almost immediately. H.G.Wells and Ray Bradbury both include a journey to the specific feared place in their stories to help build up a feeling of tension and anticipation in the reader. In 'The Red Room', the journey is the narrator's walk to the 'haunted' room. The intense descriptions of the 'spooky' gothic setting and the shadows that followed him as he walked; 'my candle flared and made the shadows cower and quiver', force the reader to feel the tension building up inside the narrator. The use of the words 'cower' and 'quiver' describing the shadows represent the actions that the narrator felt inclined to do. Both are actions that you would experience if you were incredibly frightened, and these increase the atmosphere of suspense, as the reader anticipates the room that has had such a build up. Bradbury uses alliteration to help build up the journey to the 'Red Room'. He describes the 'spiral staircase', and a 'shadow the came sweeping'. ...read more.

Lavinia thinks that she is only being reasonable and thinking logically. Throughout the story Lavinia puts herself in position of 'The Lonely One' as if she knows exactly how he or she thinks. She does this in order to rationalise and show how unlikely it is that he will strike again so soon; 'You've got to feel like murdering people, at least that kind of murderer does. And he's just resting up now.' There are many suggested explanations for why Lavinia does this, one of them being that she is possibly sexually frustrated. After the women discover that a man asked after Lavinia in the drugstore and found out where she lives, Lavinia is described as not knowing what to feel; 'She felt nothing - except perhaps the slightest prickle of excitement in the back of her throat'. At this point in the story Lavinia is excited by the prospect of being the next victim of 'The Lonely One'. She says that 'A lady has far too little excitement in her life, especially an old maid, a lady thirty-seven like me'. I feel that H.G.Wells, author of 'The Red Room' is far more successful at making you empathise with the fears and uncertainties of the central character than Ray Bradbury. I found the build up to the events in 'The Red Room' both entertaining and enthralling. The ending of 'The Whole Town Sleeping' was far too predictable and the conclusion of 'The Red Room' brings up a thought provoking point. I like the idea of fear becoming a physical presence, and the power that fear can have over people. I appreciate Wells' style of writing far more than Bradbury's, and I found I could relate to many aspects of the narrator's personality extremely easily. He writes a successful story that not only sets out to make the reader fearful, it explains a lot about what fear is, what makes people fearful, and how the psychological build up of fear can emphasise it to extremity. ...read more.