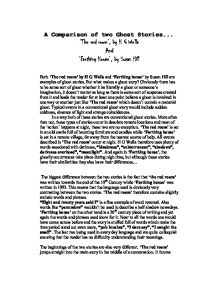 A Comparison of two Ghost Stories.

A Comparison of two Ghost Stories... 'The red room', by H G Wells And 'Farthing House', by Susan Hill Both 'The red room' by H G Wells and 'Farthing house' by Susan Hill are examples of ghost stories. But what makes a ghost story? Obviously there has to be some sort of ghost whether it be literally a ghost or someone's imagination, it doesn't matter as long as there is some sort of suspense created from it and leads the reader for at least one point believe a ghost is involved in one way or another just like 'The red room' which doesn't contain a material ghost. Typical events in a conventional ghost story would include sudden coldness, absence of light and strange coincidences. In a way both of these stories are conventional ghost stories. More often than not, these types of stories occur in desolate remote locations and most of the 'action' happens at night, these two are no exception. 'The red room' is set in an old castle full of haunting furniture and candles while 'Farthing house' is set in a remote village, far away from the nearest source of help. All events described in 'The red room' occur at night. ...read more.

This does make sense as in the 19th century science dominated belief. Scientific breakthroughs where at their highest in terms of occurrence. People looked for a rational answer for everything, it was the way of the time. Nowadays people are left to choose for themselves. There are so many strange cults and religions out there which just goes to show how some people nowadays are more open minded than they were 100 years ago. There is one line of text, in 'The red room', which explains the whole meaning of the ghostly encounter. The protagonist of the story delivers the line to the 'old people' in order to explain the supposed ghostly occurrences. "The worst of all things that haunts poor mortal man and that is in all its nakedness - fear." The last few pages sees the attitudes of the protagonist change, "He spoke no longer as one who greets an intruder, but as one who grieves for a broken friend" There is also a tense moment, basically a long winded build up, before the big revelation that the entity was fear. There is a contrast between the beginning of this story and the ending while there is also link between the main character and the 'old people' from the start and end. ...read more.

Just like in medieval times everything revolved around church and religion, in the 19th centaury science dominated most beliefs. This man is typical to this as he is driven purely by science, He also panics when he is confronted with occurrences which challenge his scientific hypothesis. The protagonist of 'Farthing house' on the other hand is completely different. This time the main character is a timid but mature and compassionate woman who doesn't panic when confronted with a ghost but rather shows sympathy for it. So the two protagonists are completely different. This is also the case with the actual ghosts involved. In 'Farthing house' there is a material ghost while in 'the red room' the ghost is a figment of the protagonists imagination and fear. The assumed ghost in 'the red room' displays poltergeist traits, being very aggressive and loud while the ghost in 'farthing house' is like a harmless lost spirit, again very contrasting. I think both stories should be commended because they achieve their aim, to be a ghost story while I however, prefer 'the red room' mainly because it is a more gothic tinted story with much more action. I think it reads far better and is far more appealing and enjoyable to me personally. ...read more.