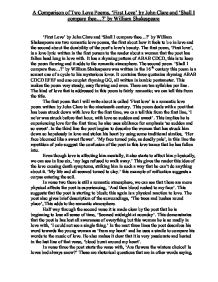 A Comparison of Two Love Poems, 'First Love' by John Clare and 'Shall I compare thee...?' by William Shakespeare

Half way through the second verse it is made clear by the poet that he is beginning to lose all sense of time, 'Seemed midnight at noonday'. This demonstrates that the poet is has lost all awareness of everything but this woman he is so madly in love with, 'I could not see a single thing.' In the next three lines the poet describes his word towards the young woman as 'from my heart' and he uses a simile to compare his words to the music of love. He also makes it clear that it is very passionate and heated in the last line of that verse, 'blood burnt around my heart'. In verse three the poet starts the verse with, 'Are flowers the winters choice? Is loves bed always snow?' These are rhetorical questions that are in other words saying, why is love so physically cruel? As we can see the atmosphere is less romantic and starts to get far more depressing. He also realises that as hard as he tries, he will not get her. ...read more.

As we approach the end of the poem, Shakespeare ends it by, saying, 'So long as men breathe or eyes can see, so long lives this gives life 2 thee'. This tells the reader that as long men are here to witness her, it will give life to her beauty as her beauty is nurtured by the glances of men. In conclusion there are many differences and similarities betweens the two poems that I had studied. They were quite similar in many ways. For example in both the poems the love that is expressed I feel has a hint of an unrequited nature especially in John Clare's 'First Love'. Also both poems refer back to nature and both used rhetorical questions, which added affect to their poems. They also differ in many ways with Shakespeare in his poem seeming to appear less desperate, almost as if he had found his true love whereas Clare in his poem seemed desperately in love with a woman that could not return that love. Also the English that is used in Shakespeare's poem is far more different to that of Clare's poem, maybe because Shakespeare's was written in the 1500s, whereas Clare's poem was written during the nineteenth century. ...read more.