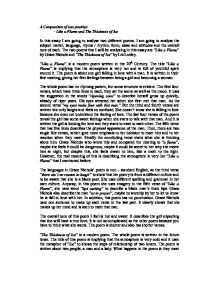 A Comparison of two poetries - Like a Flame and The Thickness of Ice In this essay I am going to analyse two different poems. I am going to analyse the subject matter, language, rhyme / rhythm, form, ideas and attitudes and the overall tone of each. The two poems that I will be analysing in this essay are "Like a Flame" by Grace Nichols and "The Thickness of Ice" by Liz Loxley. "Like a Flame" is a modern poem written in the 20th Century. The title "Like a Flame" is implying that the atmosphere is very hot and is full of youthful spirit around it. The poem is about one girl falling in love with a man. It is written in their first meeting, giving her first feelings between being a girl and becoming a woman. The whole poem has no rhyming pattern, but some structure is evident. The first four verses, which have three lines in each, they set the scene as well as the mood. It uses the suggestion in the words "ripening cane" to describe herself grow up quickly, already of riper years. ...read more.

In addition, this poem has no punctuation. Grace Nichols uses one sentence to make up each verse in the last part. It clearly shows that she makes up her mind and is keen to meet that man. The overall tone of this poem I feel is hot and sweet. It describes the girl expecting that she will have a true love. It is not as complicated as the other poem because you have to think what she wants. The poem is shorter and also has shorter verses. "The Thickness of Ice" is a modern poem. The whole poem is written in the future tense. The title of this poem is implying that the atmosphere is very cold and it uses the metaphor of "Ice" to shows the steps of relationship of two lovers. The poem is written about two people, a man and a lady. What happens in the poem is they meet and fall in love, and start to fail, but at the ends of their relationship, they hope to become friends again. The poem has a regular structure. It is split up into six verses, but it divides naturally into three parts. ...read more.

The third part is formed by the last two verses. The fifth verse describes the relationship is over they will still meet, but only as friends. It uses word "enemies" to suggest that they will hate each other, they are both hurt from ending the relationship They may have both got new partners, and it means that they are involved in a new relationship. The sixth verse, Liz Loxley uses "thinness of ice" compared to "thickness of ice" to suggest that not all relationships run smoothly. They may want things to run smoothly, may want things to go back to the way they were before they got into the relationship. They want to become friends again. The overall tone of this poem I feel is cold and sad. It describes the ups and downs of relationship. It has been described well and explains how they meet and fall in love but it doesn't work out for them both. The poem has a regular structure and is easy to understand. Both of the poems are about love, but I prefer the poem "Like a Flame", because it's a poem about hot love, which is sweet. However the cold love poem does sort out for them as they feel they want to be friends ...read more.

This essay demonstrates a clear understanding of both poems with analysis of language, structure and form being present. When writing a comparative essay it is much better to make links throughout the essay rather than analysing each poem independently.