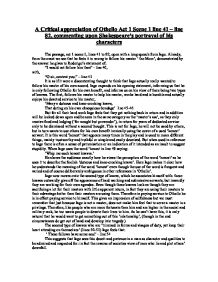 A Critical appreciation of Othello Act 1 Scene 1 line 41 - line 82, commenting upon Shakespeare's portrayal of his characters

A Critical appreciation of Othello Act 1 Scene 1 line 41 - line 82, commenting upon Shakespeare's portrayal of his characters The passage, act 1 scene 1, lines 41 to 82, open with a long speech from Iago. Already, from the onset we see that he feels it is wrong to follow his master ' the Moor', demonstrated by the answer he gives to Roderigo's statement of: "I would not follow him then" - line 40, with, "O sir, content you." - line 41 It is as if it were a discontenting thought to think that Iago actually really wanted to follow his master of his own accord. Iago expands on his opening statement, informing us that he is only following Othello for his own benefit, and informs us on his view of there being two types of knaves. The first, follows his master to help his master, works hard and is humble and actually enjoys his devoted service to his master; 'Many a duteous and knee-crooking knave, That doting on his own obsequious bondage' line 45-46 But for all their hard work Iago feels that they get nothing back in return and in addition will be looked down upon and be seen in the same category as the 'master's ass', as they only receive food and lodging ('for nought but provender'), in return for years of dedicated service only to be dismissed without a second thought. ...read more.

It seems that Iago sees himself and Othello as opposites and therefore Othello will never be able to understand Iago, and therefore can not understand his deceitfulness and plotting against his 'friends' and Iago will never be able to comprehend Othello's love for Desdemona as a thing of beauty and purity. Thus Iago can only make the tragedy happen by manipulating what is good and sowing the seeds of doubt. Iago comments that he is not seeking 'love and duty' and so we start to wonder at how Iago will ' thrive by them' from his 'peculiar end.' This last statement suggests that nobody will understand Iago's motives or the passion which drives his actions because even Iago refers to his end as 'peculiar' and therefore as people will not be able to see it from Iago's point of view they will wrongly assume that he is a psychopath or mental. The lines: '...not for love and duty, But seeming so for my peculiar end' create dramatic tension and suspense, making the audience wonder what Iago could possibly have in store for them. Therefore, Shakespeare has written this line deliberately ambiguous to arouse curiosity in the viewers. Ironically, line 60 includes: 'Heaven is my judge' this is the same heaven that does not intervene in any of the unfolding tragedy even though Cassio, Desdemona, Othello and even Emilia call to heaven for blessings and protection. ...read more.

In Iago's soliloquy-like speech (lines 41- 66) poetic images and long words do not slow the quick movement, like the agile darting of Iago's mind constantly on the look out for new niches to get in and use to his advantage. The light punctuation helps keep the fasted paced childlike enthusiasm. Iago's speeches are full of ambiguous and mysterious phrases, these highlight his double character that is in fact a paradox in itself and often seem to present two conflicting and antagonist characters, even though they are both represented through Iago. There seems to be no fixed sentence length with many varied disjointed phrases helping make up Iago's speech and present his rush of ideas and force of feeling. This passage is really a platform for the 'plotter' Iago, to reveal his true feelings on his relationship with Othello and how he intends to use his service to Othello and the social role he is expected to play as a base for his deceit and ruin of other characters. Therefore dramatically this is an intimate scene between the audience and Iago (with Rodrigo, as merely an excuse for Iago to speak) where they are invited to see events and situations from Iago's point of view. This low-key plotting and the later loud disruption caused by Iago to wake Brabantio, is further indication of how quickly and easily i.e. how flexible, Iago can be to change to suit the situation to deceive characters, manipulate trust and ultimately cause a tragedy through his consuming hatred for seemingly all things good and beautiful. By: Chee For: Mr Mango ...read more.