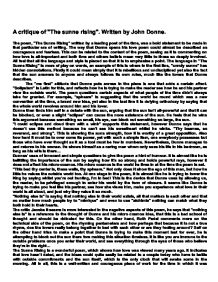 A critique of &quot;The sunne rising&quot;.

A critique of "The sunne rising". Written by John Donne. The poem, "The Sunne Rising" written by a leading poet of the time, was a bold statement to be made in that particular era of writing. The way that Donne opens his love poem could almost be described as courageous and fearless. This can be related to the content of the poem, seeing as it is commenting on how love is all-important and both time and others beliefs mean very little to those so deeply involved. All feel that all the language and style is placed so that it is to emphasise a point. The language in "The Sunne Rising" is more of play on words, an example of this is where in the first line, "unruly sunne" has hidden connotations. Firstly it could mean simply that it is rebellious and undisciplined yet also the fact that the sun answers to anyone and always follows its own rules, much like the lovers that Dunne describes. The "me first" attitude that Dunne puts across in the piece is one that adds a certain affect. ...read more.

"Thy beames, so reverend, and strong". This is showing the suns strength, how it is worthy of a great opposition. Also how hard it must be to over come its power, yet with such a simple item, one everybody possesses but those who have ever thought as it as a tool must be few in numbers. Nevertheless, Dunne manages to and returns to his woman. He shows himself as a caring man whom only sees his life in his bedroom, as long as his wife is there... Dunnes' uses of innocent and simple questions to give the poem a hint of humour. It is almost like he is belittling the importance of the sun by saying how it's so strong and holds powerful rays, however it does not affect his micro-cosmos. His micro cosmos is the world he lives in at the time the poem is set. "This bed thy center is, these walls, thy spheare." Not only does it show the ego of this man, but how he little he values the outside world too. ...read more.

Self on the other hand tries to make a point that Dunne is trying to make this moment last for ever, he is attempting to block out the sun there fore making this situation timeless. It is like you are immune to the outside problems once you enter their world, and see everything through the eyes of those who believe they're in the right... The Sunne Rising is a wonderful poem, which shows how love was viewed many years ago. It indicates that love hasn't dated, and the ideas could quite easily be related to a couple today who have to battle with outside commitments and the sun itself, which is the only clock that will awake some in the morning. All in all, this is a well-written and courageous piece of work for the time in which it was written and if it was published in today's modern world, I feel it would still make such an impact. I thoroughly enjoyed reading this piece of work, and it does relate to anybody in love. Jenny Barratt ...read more.