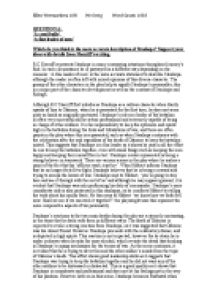 A cruel bully A fine leader of men Which do you think is the more accurate description of Stanhope? Support your ideas with details from Sherriffs writing.

﻿Ellen Weerasekera 10H Mr Gerig Word Count: 1033 QUESTION A: ?A cruel bully? ?A fine leader of men? Which do you think is the more accurate description of Stanhope? Support your ideas with details from Sherriff?s writing. R.C Sherriff represents Stanhope in many contrasting situations throughout Journey?s End. In each circumstance he is portrayed in a different way depending on the scenario. ?A fine leader of men? is the more accurate statement to describe Stanhope, although the reader is often left with mixed opinions of this diverse character. The gossip of the other characters in the play help to signify Stanhope?s personality; this is a major part of the character development as well as the contrast of Stanhope and Raleigh. Although R.C Sherriff first introduces Stanhope as a callous character when Hardy speaks of him to Osborne, when he is presented for the first time, he does not seem quite as harsh as originally portrayed. Stanhope?s role as a leader of the battalion is often very successful and he seems professional and extremely capable of being in charge of other soldiers. ...read more.

The death of Osborne is expected to evoke a strong reaction from Stanhope, as it was suggested that Osborne was his closest friend. However Stanhope proceeds with the celebratory dinner, and is depicted in high spirits. This reaction is not expected; however the he strain he is under is shown when he asks for more alcohol, which revisits the detail that drinking is Stanhope?s coping mechanism for the terrors of war. As the scene continues, it is evident that he is trying to divert his and the other soldier?s minds from the topic of Osborne?s death. This effort shows good leadership skills as it suggests that Stanhope was trying to keep the battalion together and he did not want any of the other soldiers to be distressed or distracted. This is a good quality as it shows that Stanhope is considerate and professional and does not let his feelings get in the way of his position. However later on in this scene, Stanhope becomes frustrated when Hibbert and Trotter start to speak of Raleigh and the raid. ...read more.

Stanhope confesses to Osborne when drunk ?if I went up those steps into the front line ? without being doped with whisky ? I?d go mad with fright.? Sherriff does this to create a vulnerable side to Stanhope yet also to show how Stanhope has hidden this from the other soldiers to give them moral inspiration and confidence. In conclusion, neither statements provide a completely accurate description Stanhope?s character, however ?a fine leader of men? is more truthful than ?a cruel bully?. This is because all of Stanhope?s actions, whether they are positive or negative, were primarily to protect all of the soldiers in his battalion and he always has their best interests in mind. However they are often portrayed in a rather harmful or unproductive way and this gives the reader a bad impression of Stanhope. Overall Stanhope is extremely committed to his position and is not a bully at all, only ever being critical and harsh when necessary. Any point where Stanhope shouts at another soldier, in fact just shows that he is a fine leader as he must maintain respect and discipline within the battalion and he is only ensuring this is present. ...read more.