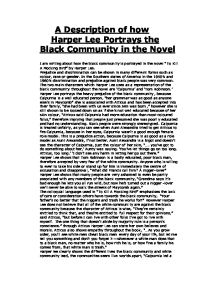 A description of how Harper Lee portrays the black community in the novel 'To kill a mocking bird'.

A Description of how Harper Lee Portrays the Black Community in the Novel I am writing about how the black community is portrayed in the novel "To Kill A Mocking Bird" by Harper Lee. Prejudice and discrimination can be shown in many different forms such as colour, race or gender. In the Southern states of America in the 1950's and 1960's discrimination and prejudice against black people was very common. The two main characters which Harper Lee uses as a representation of the black community throughout the novel are 'Calpurnia' and 'Tom Robinson.' Harper Lee portrays the heavy prejudice of the black community, because Calpurnia is a well educated person, "her grammar was as good as anyone else's in Maycomb" she is associated with Atticus and has been accepted into their family, "she had been with us ever since Jem was born," however she is still shown to be looked down on as if she's not ...read more.

Anyone who is willing to ever to take his side or stand up for him is immediately the centre of accusation and disapproval, "What did Francis call him? A nigger-lover" Harper Lee shows that many people are very ashamed to even be partly associated with any members of the black community, "Grandma says it's bad enough he lets you all run wild, but now he's turned out a nigger-lover we'll never be able to walk the streets of Maycomb again." The colloquial language used in "To Kill A Mocking Bird" emphasises the lack of care or consideration others have towards the black community, "Your father's no better that the niggers and trash he works for!" However Harper Lee does not believe that all of the white community are against the black community because the character of Atticus is wise, "They're certainly entitled to think that, and they're entitled to full respect for their opinions," said Atticus, "but before I can live with other folks I've got to live with myself. ...read more.

Their way of living was shown in the book as very different to the white community, "There was no sign of piano, organ, hymn books." - they had no necessities, "the familiar ecclesiastical impediments we saw every Sunday." Overall Harper Lee makes the reader feel pity for the black community because no black family is portrayed badly and Tom Robinson is found guilty purely on the basis of the colour of his skin, by the jury in his case against the Ewells. The guilty verdict is a direct result of a racist community. Tom was never given a fair chance in the trial, even though that the evidence was proving him innocent. "There's something in our world that makes men lose their heads - they couldn't be fair if they tried. In our courts, when it's a white man's word against a black man's, the white man always wins. They're ugly, but those are facts of life." 18th November 2002 ...read more.