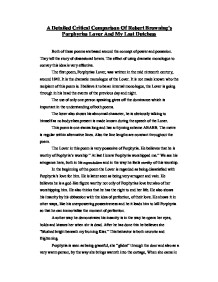 A Detailed Critical Comparison Of Robert Browning's Porphyrias Lover And My Last Dutchess.

A Detailed Critical Comparison Of Robert Browning's Porphyrias Lover And My Last Dutchess Both of these poems are based around the concept of power and possesion. They tell the story of obssesional lovers. The effect of using dramatic monologue to convey this idea is very effective. The first poem, Porphyrias Lover, was written in the mid ninteenth century, around 1842. It is the dramatic monologue of the Lover. It is not made known who the recipient of this poem is. I believe it to be an internal monologue, the Lover is going through in his head the events of the previous day and night. The use of only one person speaking gives off the dominance which is important in the understanding of both poems. The lover also shows his abnormal character, he is obviously talking to himself as no body elses present is made known during the speech of the Lover. This poem is one stanza long and has a rhyming scheme ABABB. The metre is regular within alternative lines. Also the line lengths are constant throughout the poem. The Lover in this poem is very possesive of Porphyria. He believes that he is worthy of Pophyria's worship " At last I knew Porphyria worshipped me." ...read more.

It is developed from the idea of worship to the easiness in which he states "I strangled her" and in the events which follow. We are also shocked by his audacity in saying "no pain felt she". These events are melodromatic and this helps to createn and develop the effectiveness of the whole poem. The storm in the beginning mirrors the events that the people in the poem experience. The poet uses personification in describing the storm's effect on the surrounding environment. "The sullen wind (that)... did it's worst to vex the lake" and the "spite" of the elm-trees. The "sullen" is an accurate description of the way in which the Lover acts towards Porphyria. The brewing storm gives the sense of forboding. The Lover also says "I listen heart fit to break" this gives signals the sense of something being wrong. The idea of Porphyria bringing warmth into the room contrasts with the image of the storm outside. The lack of response also creates a very tense atmosphere in the cottage, and the lack of response is the Lover acting sullen, reflecting the behaviour of the storm. This reference of the Lover's response, as being sullen, like the storm is effective in conjuring up images of distress and uneasiness. ...read more.

At the end of the poem we are left to wonder how long they layd in each others arms and what, if anything, happens to the Lover. My Last Duchess is also written using dramatic monologue. However, unlike Porphyria's Lover, it is spoken to an ambassador, and it is informal. The Duke is arranging to marry a women, through the father's ambassador. The concept of the Duke's dominance is made immedeatly apparent. The first indication of this is in the way in which it is only one person speaking, continuously through out the poem. This, like Porphyria's Lover, is only one stanza long which emphasises the idea of the Duke talking constantly. The poem is in rhyming couplets and uses a pentameter rhythm all the way through. The length of the lines, as with Porphyria's Lover, are constant all the way through the poem. This poem is about a very controling husband. The Duke freely admits to having his wife murdered, and expects to be veiwed as powerful, wealthy, succcessful, and in complete control. It seems he wants the ambassader to fear him. He wishes to impress the ambassader. Intitielly we perceive the Duke as being very powerful.As he believes he should be able to marry the amassador's master's daughter. This is shown through the idea having control ...read more.