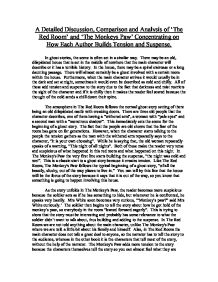 A Detailed Discussion, Comparison and Analysis of 'The Red Room' and 'The Monkeys Paw' Concentrating on How Each Author Builds Tension and Suspense.

A Detailed Discussion, Comparison and Analysis of 'The Red Room' and 'The Monkeys Paw' Concentrating on How Each Author Builds Tension and Suspense. In ghost stories, the scene is often set in a similar way. There may be an old, dilapidated house that is set in the middle of nowhere that the main character will describe or it has a terrible history. In the house, there may be a spiral staircase or a long daunting passage. There will almost certainly be a ghost involved with a certain room within the house. Furthermore, when the main character arrives it would usually be in the dark and set at night, sometimes it would even be described as cold and chilly. All of these add tension and suspense to the story due to the fact that darkness and mist restricts the sight of the character and if it is chilly then it makes the reader feel scared because the thought of the cold sends a chill down their spine. The atmosphere in The Red Room follows the normal ghost story setting of there being an old dilapidated castle with creaking doors. There are three old people that the character describes, one of them having a "withered arm", a woman with "pale eyes" and a second man with a "monstrous shadow". ...read more.

It continues to build until the couple see a man outside pondering whether to come in or not. This is when you find out that their son is dead and this is the consequence for making a wish with the monkey's paw. The author gives a hint to what might happen later in the story when the boy says, "Well, I don't see the money...and I bet I never shall." This is inferring that something might happen to the boy in order for them to get the money. In The Red Room, we learn new information about the room very near to the end; H G Wells leaves the reader in suspense right up until the character is about to enter the red room and that is when we find out what the room is actually about. We learn the history of the room, who died there and how they died. In The Monkey's Paw, the tension doesn't stop building because after the couple have lost their son the man is under orders of his wife to get their son back, so reluctantly he wishes for him to return. At first, the man is so astonished that he cries, "Good God, you are mad!" ...read more.

The fact that it is referring to death makes the reader wonder what is going to happen, it is adding to the suspense of the story. I believe that The Monkey's Paw has become so successful because when it was originally published in the late nineteenth century, the public were not used to such language like, "For God's sake don't let it in." because it was almost immoral to say such things. The language therefore shocked people. I think that this is partly what has made this ghost story so famous and successful, together with the fact that it builds up tension and suspense in such a way that it engulfs the reader. The Red Room has a similar effect to this in the way that it builds up a lot of tension and suspense throughout the story. However, in this book instead of building the tension up to a climax it has an anti climax. I feel that because of this it has made the book more successful because there aren't many books that have such a big anti climax, especially at the time of its publication. I believe that these books have sold so many copies because they are written by famous authors and build up tension and suspense throughout the books. By Andrew Read 10P ...read more.