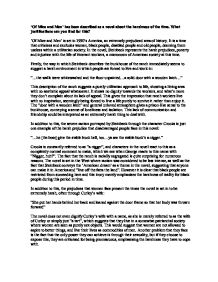 Of Mice and Men has been described as a novel about the harshness of the time. What justifications can you find for this?

'Of Mice and Men' has been described as a novel about the harshness of the time. What justifications can you find for this? 'Of Mice and Men' is set in 1930's America, an extremely prejudiced area of history. It is a time that criticises and excludes women, black people, disabled people and old people, deeming them useless within a utilitarian society. In the novel, Steinbeck represents the harsh prejudices, poverty and injustice with the life of itinerant workers, a microcosm of American society at this time. Firstly, the way in which Steinbeck describes the bunkhouse of the ranch immediately seems to suggest a harsh environment in which people are forced to live and work in: "...the walls were whitewashed and the floor unpainted...a solid door with a wooden latch..." This description of the ranch suggests a purely utilitarian approach to life, showing a living area with no aesthetic appeal whatsoever. ...read more.

The fact that the ranch is racially segregated is quite surprising for numerous reasons. The novel is set in the West where racism was considered to be less intense, as well as the fact that Steinbeck conveys the 'American dream' as a theme in the novel, suggesting that anyone can make it in America and "live off the fatta the land". However it is clear that black people are restricted from succeeding here and this irony merely emphasises the harshness of reality for black people during this period in time. In addition to this, the prejudices that women face present the times the novel is set in to be extremely harsh, often through Curley's wife: "She put her hands behind her back and leaned against the door frame so that her body was thrown forward" The novel does not even dignify Curley's wife with a name, as she is merely referred to as the wife of Curley or simply just "a tart", which suggests that they live in a somewhat patriarchal society where women are seen as purely sex objects. ...read more.

This shows a huge lack of ambition among the workers, from the fact that the only excitement for these workers has come from a mere acquaintance of Whit's name being printed in a "pulp magazine", which was a piece of inexpensive fiction. This is not only quite pathetic, but also extremely saddening to see grown men become energised by something so seemingly trivial. Although people living in this time period and circumstances would not necessarily see this as harsh, looking at it from today's perspective, in contrast it most definitely seems like an austere environment. In conclusion, the harsh living conditions, inhibitions and prejudices that the majority of the disadvantaged ranch-workers must live with have a clear correlation to the state of American society during The Great Depression of the 1930's. Steinbeck seems to have created a character for each type of harshness that was experienced, for example, Curley's wife corresponds to sexism, and Candy corresponds to old and disabled people, all of which creates an accurate impression of the harshness of the times that 'Of Mice and Men' is set in. ...read more.