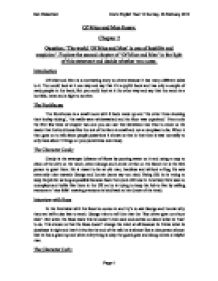 Of Mice and Men Essay: Chapter 2 Question: 'The world 'Of Mice and Men' is one of hostility and suspicion'. Explore the second chapter of 'Of Mice and Men' in the light of this statement and decide whether you agree. Introduction Of Mice and Men is a contrasting story to others because it has many different sides to it. You could look at it one way and say that it's a joyful book and has only a couple of nasty people in the book, But you could look at it the other way and say that the ranch is a horrible, mean and a fight to survive. The Bunkhouse The Bunkhouse is a small room with 8 beds made up and 'the other three showing their burlap ticking', 'the walls were whitewashed and the floor was unpainted.' From only the first few lines of chapter two and you can see that Steinbeck has tried to show us the reader that the bunkhouse like the rest of the farm is small and not a nice place to be. ...read more.

Interview with Boss In the Interview with the Boss he comes in and try's to ask George and Lennie why they are half a day late to work. George tries to tell him that the 'Bus driver give us a bum steer'. But when the Boss hears this he doesn't even care and carries on about what he 'had' to do. This shows us that the Boss doesn't change his mind at all because he thinks what he does/says is right and that's it but by the end of the talk he is almost like a nice person almost like he has a guard up and when everything is okay the guard goes and along comes a helpful man. The Character Curly Curly is the Bosses Son, he is meant to be small and 'one of those small guys who hate big guys'. As soon as he comes through the door he looks a Lennie and puts up to fits, like you would in a boxing ring. ...read more.

but some other people think that it is because she feels like she is held captive in the house and whenever she is with Curly outside the house it told to 'go to the house'. This shows us that she could be feeling like she is all most an item of Curly's and isn't allowed to go anywhere without permission of Curly. This shows us again that the ranch can be almost like a prison. Conclusion Overall I think that for Chapter Two the statement: 'The world 'Of Mice and Men' is one of hostility and suspicion' is true because if you look at all the points above the only nice thing at the ranch is Candy and he is only putting it on so he doesn't get fired from the ranch and die from not having any money. This shows us that the ranch a place with only Good patches and are few and far between. ?? ?? ?? ?? Ben Pakenham Cox's English Year 10 Sunday, 05 February 2012 Page 1 ...read more.