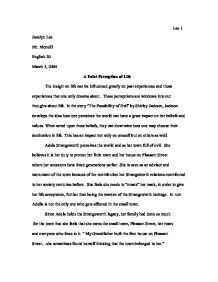 A faint perception of life -

Lee 1 Jocelyn Lee Mr. Mcneill English 20 March 3, 2004 A Faint Perception of Life The insight on life can be influenced greatly on past experiences and those experiences that one only dreams about. These perceptions are windows into our thoughts about life. In the story "The Possibility of Evil" by Shirley Jackson, Jackson develops the idea how one perceives the world can have a great impact on her beliefs and values. When acted upon these beliefs, they can determine how one may choose their destination in life. This has an impact not only on oneself but on others as well. Adela Strangeworth perceives the world and as her town full of evil. She believes it is her duty to protect her little town and her house on Pleasant Street where her ancestors have lived generations earlier. She is seen as an advisor and monument of the town because of the contribution her Strangeworth relations contributed to her society centuries before. She feels she needs to "create" her mark, in order to give her life acceptance, further than being the warden of the Strangeworth heritage. ...read more.

There wouldn't have been a town here at all if it hadn't been for my grandfather and the lumber mill." (212). To carry on the Strangeworth tradition of contributing to the town, she offers her advice to the townsfolk. "Most of the children stood back respectfully as Miss Strangeworth passed.... it would have been most reprehensible for their parents to permit their children to mock Miss Strangeworth of Pleasant Street....no one in town would dare to disturb Miss Strangeworth during her afternoon nap." (219,218) She would give advice to her neighbors then go home and wrie letters saying the totally opposite. Adela does not see the evil she is committing when she writes the anonymous, nasty letters throughout the small town. She wrote a letter to the Crane family stating: "After thinking for a minute, although she has been phrasing the letter in the back of her mind all the way home, she wrote on a pink sheet: DIDN'T YOU EVER SEE AN IDIOT CHILD BEFORE?" (216) She believes that she is warning everyone of the evil that is lurking within her town and in turn is upholding her family name; although she leaves no clue that she is writing them. ...read more.

They belonged only on Pleasant Street, as did her ancestors. "The town was proud of Miss Strangeworth and her roses and her house. They had all grown together." (215) Adela's thoughts and feelings about the evil in her town was conclusive when she received an anonymous letter from a fellow citizen concluding that she was caught red handed for writing the letters. "Look out at what used to be your roses." (221)When Adela finds out that her roses have been destroyed she realizes that she can not destroy the evil in her town and that there is no good in people. "She began to cry silently for the wickedness of the world." (221) Her roses were very important to her and with them destroyed she realized that people have no respect for the Strangeworth's contribution to the small town and her family's legacy. Lee 4 Adela felt that the town needed to be run by her authority and that she was always right. She could not accept other people's point of views or faults. She could not see how her strange way of perceiving things were not always best for her town or the people. To Adela her way of approaching and handling situations seemed normal but in turn she was wrecking the town. ...read more.