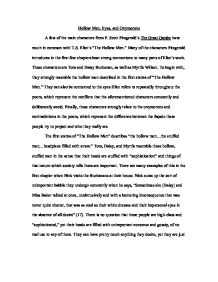 A few of the main characters from F. Scott Fitzgerald's The Great Gatsby have much in common with T.S. Eliot's &quot;The Hollow Men.&quot;

Hollow Men, Eyes, and Oxymorons A few of the main characters from F. Scott Fitzgerald's The Great Gatsby have much in common with T.S. Eliot's "The Hollow Men." Many of the characters Fitzgerald introduces in the first few chapters bear strong connections to many parts of Eliot's work. These characters are Tom and Daisy Buchanan, as well as Myrtle Wilson. To begin with, they strongly resemble the hollow men described in the first stanza of "The Hollow Men." They can also be connected to the eyes Eliot refers to repeatedly throughout the poem, which represent the conflicts that the aforementioned characters constantly and deliberately avoid. Finally, these characters strongly relate to the oxymorons and contradictions in the poem, which represent the difference between the fa�ade these people try to project and who they really are. The first stanza of "The Hollow Men" describes "the hollow men...the stuffed men...headpiece filled with straw." Tom, Daisy, and Myrtle resemble these hollow, stuffed men in the sense that their heads are stuffed with "sophistication" and things of that nature which society tells them are important. ...read more.

Daisy knows that Tom is having an affair, yet is unable to confront him. Even so, Fitzgerald conveys the sense that she is deeply troubled by this knowledge; Daisy emerges from the house after Tom has received a phone call from Myrtle: "'It couldn't be helped!' cried Daisy with tense gayety" (20). It is apparent that all three members involved in the affair are greatly troubled by these "eyes" that they are too afraid to face. This image of the eyes is repeated later in the poem as well: "The eyes are not here / There are no eyes here / In this valley of dying stars." This seems to depict how there is a way to escape the eyes, but it is in "the valley of dying stars". This also seems to connect to The Great Gatsby characters being discussed. They are very much like stars in their lifestyles (although Myrtle only in her life with Tom), yet the only way to escape these eyes that they are so afraid to deal with is by eventually arriving at "the valley of the dying stars." ...read more.

Daisy's emotions are the most obvious shadow between she, Tom, and Myrtle's "idea" and "reality." There are many contradictory comparisons in The Great Gatsby as well, much like those in "The Hollow Men." After this whole ordeal with Myrtle calling Tom during dinner, Tom and Daisy are seeing Nick to the door as he departs. Tom and Daisy even have a few unpleasant words right before they see Nick off, yet immediately afterward, "They came to the door with me and stood side by side in a cheerful square of light" (24). This image is extremely contradictory to the implications of the state of Tom and Daisy's relationship, much like those contradictory comparisons in "The Hollow Men." All in all, there are many connections between Fitzgerald's The Great Gatsby and Eliot's "The Hollow Men." The characters of Tom, Daisy, and Myrtle are very good examples of "hollow, stuffed men." Their situation also relates to much of the poem, as well as the way it was written depicting images resembling those in the poem. The two works may not necessarily be based on the same thing or directly related, but there are a number of strong connections that can be made. ...read more.