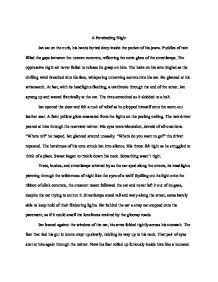 A Foreboding Night. Ian sat on the curb, his hands buried deep inside the pocket of his jeans.

A Foreboding Night Ian sat on the curb, his hands buried deep inside the pocket of his jeans. Puddles of rain filled the gaps between the uneven concrete, reflecting the eerie glow of the streetlamps. The oppressive night air never failed to release its grasp on him. The hairs on his arm tingled as the chilling wind breathed into his face, whispering unnerving secrets into his ear. He glanced at his wristwatch. At last, with its headlights flashing, a taxi broke through the end of the street. Ian sprang up and waved frantically at the car. The tires screeched as it skidded to a halt. Ian opened the door and felt a rush of relief as he plopped himself onto the worn-out leather seat. ...read more.

Streetlamps stood tall and wary along the street, some barely able to keep hold of their flickering lights. Far behind the car a stray cat stepped onto the pavement, as if it could smell the loneliness emitted by the gloomy roads. Ian leaned against the window of the car, his arms folded tightly across his stomach. The fear that tied his gut in knots crept up slowly, tickling its way up to his neck. That pair of eyes shot at him again through the mirror. Now his fear rolled up furiously inside him like a tsunami. An image of him sprawled out in the open, blood spilling out of his open flesh and seeping into the cold cement flashed across his mind. ...read more.

The driver stepped down hard on the brakes and Ian fumbled once more at the door, the tires screeching in protest. The door flung open and Ian heaved himself out of the car. Shreds of asphalt scraped against his skin as he made rough contact with the road. The taxi driver looked back at the teen, who was now running towards the nearest building. He knew something was wrong when the teen mysteriously refused to answer his question. Every time he shot a casual glance at the kid, his face was taut and his whole body was tense. His passenger was like a ticking bomb about to explode at any moment. He had reached for his spanner to protect himself, only to be surprised by the poor kids' reaction. He restarted the car with a sigh. He promised himself never to pick anyone up in the dead of night ever again. ...read more.

*****
This is a very good piece of descriptive writing which is well controlled throughout.
There is some excellent imagery particularly personification, syntax is varied for dramatic effect and the writer displays a wide vocabulary.
There is an interesting 'twist' at the end of the story and the writer has obviously put a lot of thought and planning into this piece of writing.